One of the things I love best about collecting kitchen items is displaying them in my glass-fronted cabinets. When we bought this house, having cabinets like these was on my wish list. (It definitely wouldn't have been a deal-breaker for sure, but it helped when we looked at this house!)

So it was a perfect place to display some of my collections. For a while I collected printed glassware (another post on that coming soon), and I inherited some really neat red and yellow pottery, which went with my kitchen's yellow, green and red color scheme. Those made a nice display for a while. But lately I've been collecting Pyrex, FireKing and jadeite, and decided to re-organize my displays to better reflect that.

That meant moving things around and re-thinking what I reallly wanted to look at for a while. It took me the better part of a rainy afternoon last week to finally settle on a layout, so to document that, I thought I'd show you all.

Not too bad, really, but not as organized as I would like. Some of these things have been in the same spot for ten years! Also the clear glassware at the top right kind of disappears. (It's really neat close-up, with etched stars, but would be better put away somewhere else.) You can see the printed glassware all jumbled in the lower right. I figured, since you can't really make it all out, maybe it's best if I put most of it away and only get out only one set at a time.

Here's the finished display, and close ups to follow: 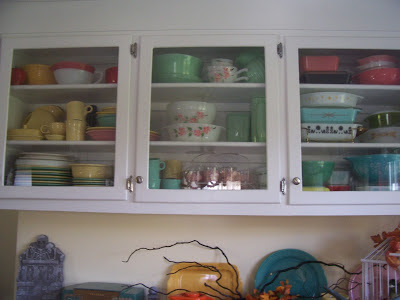 I tried to organize it by color a little bit, with the red and yellow pottery near the yellow and green Fiesta. Then the jadeite and Peach Blossom FireKing (which is a match made in heaven, I think), then the Pyrex on the right. 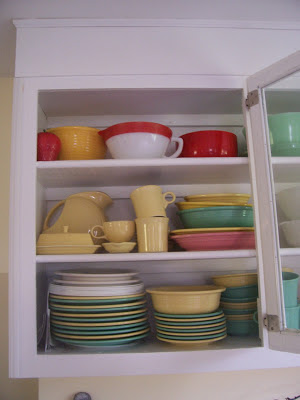 The Fiestaware is not old (mostly), and our regular everyday dishes, so they have to be easily accessible. 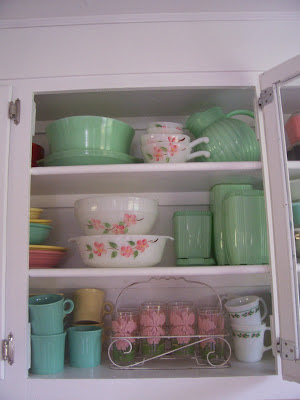 This is probably my favorite one, with the FireKing and jadeite. The printed glasses in the carrier are the only ones to make the cut right now. I bought those about 10 years ago in an antique shop for $18. That was a lot for me, and still would be, although I guess if I were to resell these I probably ask for $75! 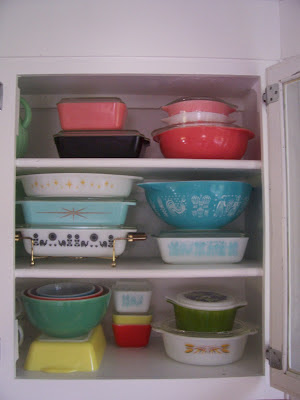 The Pyrex cabinet. I am trying really hard to limit myself to just the primary colors set and turquoise Butterprint, plus pink and promotional designs. The lone FireKing wheat casserole in the lower right belonged to my dad, so it still gets a place of honor.

Right now, I'm pretty happy with it and it is a nice change of scenery!


Posted by SusieQT at 7:56 AM 8 comments: Links to this post

Well, now that you've had enough time to digest part 1, let's move on to the miscellany and clothes I picked up from the semi-annual rummage sale.

Last year, I put a moratorium on my own buying of vintage Christmas items- I have probably 15-18 dozen vintage Shiny Brites I bought back when no one wanted them. But now that I have an antique store booth, I need the holiday inventory ;). These sweet handmade cloth ornaments are just the thing- and only set me back 25 cents for all. 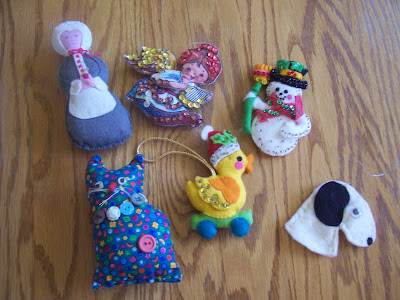 These plastic flocked window wreaths are still in their wrappers- 50 cents for all. I have done well with these on Etsy- should get them listed soon. 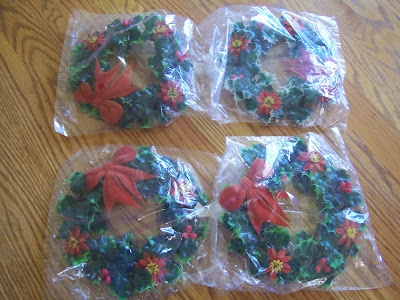 I paid 25 cents for the tin and it happened to be filled with tiny craft supplies- a win-win! The sharp-looking object is actually a vintage plastic icicle ornament. I have a little collection of those as well, this was like a bonus find. 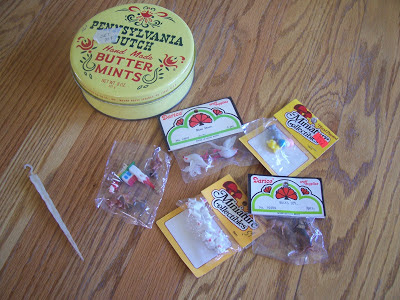 This is one of my favorites- a bunch of 7 1980s vintage T shirts- $2.25 for all. These have great vintage drinking-theme graphics. They'll be making their way into my Etsy shop for all those ironic hipsters at Xmas... 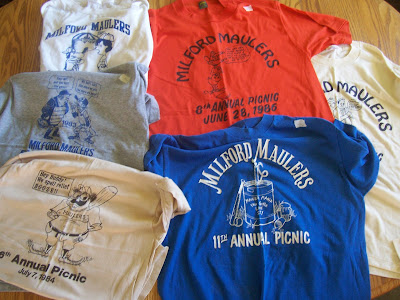 Let's take a closer look at the one on the lower left- it's my favorite! 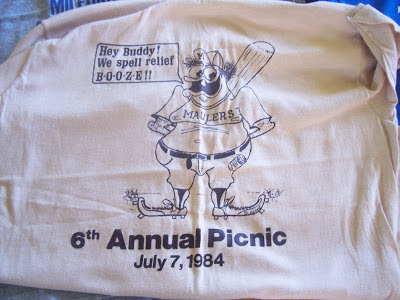 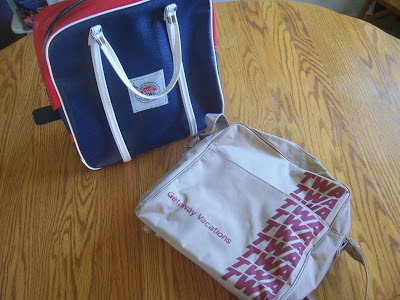 I think I mentioned before on this blog how much I love vintage flight bags. I have a couple that I use for actual trips- they are still the perfect size for carry-on luggage, and fit a laptop as well! I grabbed these while I was still waiting in line to get in (all the suitcases and lawn items were outside) for $1 each. The TWA one is from the 80s, but the red white and blue one is so 60s. The logo is from the ILGWU and it is mint! It's going to be hard to let this one go, but I can't keep everything.

If you see anything you like, watch my Etsy shop or leave a comment with your email and we can work something out. As always, blog friends get a 20% discount when you enter the coupon code PIT20OFF at checkout.

Posted by SusieQT at 7:36 AM 2 comments: Links to this post

Oh my, it's Christmas here at ChezQT! (At least for me, anyway.) Today was our town's semi-annual rummage sale. I've blogged about these before and the posts are so photo-heavy, so I decided to break them up over two days.

First up will be kitchen ware and linens! 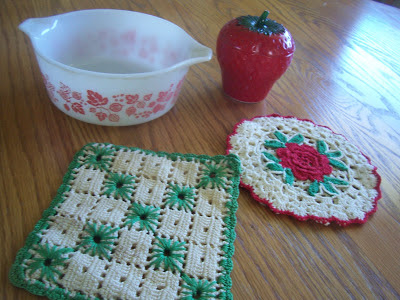 I've been lucky to find a bit of pink Pyrex lately- this pink gooseberry casserole (no lid) was $2. The strawberry sugar bowl is painted milk glass (maybe Hazel Atlas, I forget?) and has a repaired lid, but for 50 cents I couldn't pass it up. I saw a similar apple one the other day at a thrift store; now maybe I will have to go back and get that. The adorable crocheted pot rests were 25 cents each! 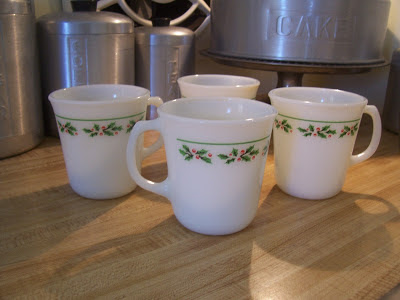 These holiday mugs are Corningware, not Pyrex, but almost the same. I'm hoping to use them as trade bait for some Pyrex I collect. Primary or Butterprint fridgies, anyone? 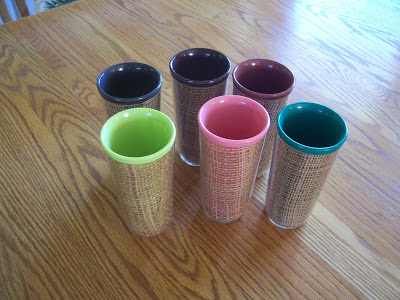 I loved these straw insulated tumblers at a yard sale in town- but passed them up for $3 there. Guess they got donated to the rummage sale and cost me $1.50 this time. This is the second vintage BBQ apron I found at this sale. I love this one even more than the first one I found in the spring. Maybe they were his-n-hers, because this one is quite a bit smaller and the ties are so dainty. Love love love the graphics on this!! 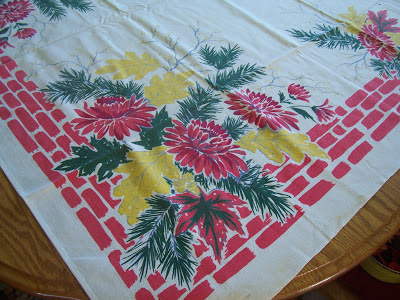 And this is the final one for today, an autumn printed tablecloth. I didn't have a fall-themed tablecloth, either and just the other day was wishing I did. Problem solved for $2.50!

Stay tuned in a couple for the clothing and miscellany!
Posted by SusieQT at 2:32 PM 7 comments: Links to this post

Help! Save the vintage from the Zombies!

More blood-curdling than any horror movie is seeing beautiful vintage clothing ruined by fake blood. While I am all for Halloween and dressing up as monsters (even for adults :) this time of year can be the last hurrah for many vintage frocks.

Get out there now and cruise those Halloween racks for vintage! It's cheaper than ever (many stores price it at a few $$) and if we don't rescue it, it can end up like above... 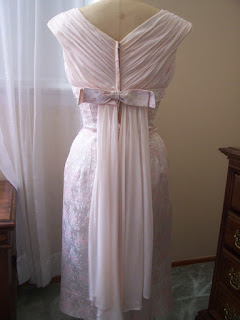 This suit- deadstock, still with tags, and now in my Etsy store. And most amazingly, these Victorian mens shoes, which I just bought yesterday. 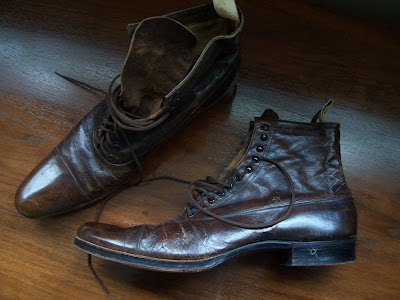 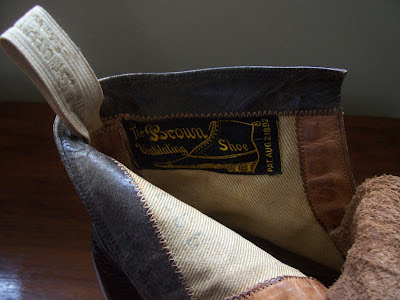 I am shocked to even hold them in my hand. That they even exist after 120 years just blows me away. And that they are still in good enough shape to be worn- the leather is still soft and soles flexible- well, I don't know what to say, except... don't ruin them with fake blood!

Posted by SusieQT at 9:58 AM 9 comments: Links to this post

A couple weeks ago, Zootsuitmama posted about her incredible blow mold collection, and asked readers to share theirs. Well, I'm finally getting around to it! 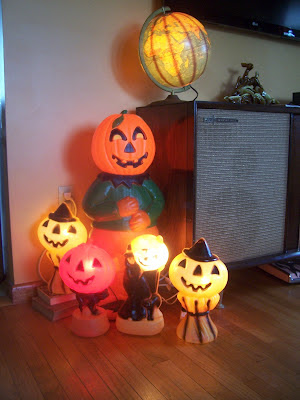 I've gotten a couple new ones since last year. The black cat holding the pumpkin (2nd from left) is the most recent, I think. I love this one. Also, since we changed our living room decor around since last Halloween, I've had to change my usual decorating formula. I still haven't quite worked it out (Christmas will be a bit different too) but I do like the idea of grouping the blo molds all together inside.

Last year I lined them all up on the steps to the front door, and it caused a couple to get a bit faded. Plus, since they're so lightweight they got knocked around a bit. I think it's safer to keep them all in this year.

I've also been doing a bit of thrifting of course- found a few nice things and some Pyrex. I'll be posting about that over at the Pyrex Collective III- check it out!
Posted by SusieQT at 1:52 PM 9 comments: Links to this post