Ain't No Cure for the Summertime Blues


Well, summer is here and it brings with it a lot of change. First of all, of course the kids are home. And soooo bored. Hehe, I knew that was coming, so we have plenty of things to do, like 5 different camps for my daughter and my son is opening his own Etsy shop! He is following in his mom's footsteps, but selling things a nine-year old boy thinks is cool. Mostly he is going to be restoring and selling customized bathroom scales, which is a project we started here. Look for the grand opening of JaysonsKustomHouse in a couple of weeks!

For now, I am also trying to keep as busy as I can, and trying to do as much selling as I can in my antique booth and my Etsy shop. So, hey, help me out a bit and see if there's anything you like! Be sure to use the coupon code PIT20OFF for 20% off your purchase!

First up, I found yet another milk glass cake plate. This makes 3 in the last 6 weeks or so. It's wedding season, so hopefully it won't stay in the booth long! And I thrifted my first set of clear bottomed Pyrex- I usually pass on these, but with Pyrex prices on the rise I thought it might be a good idea to get a set now. They are various shades of blue and are very pretty; hopefully someone will love them. 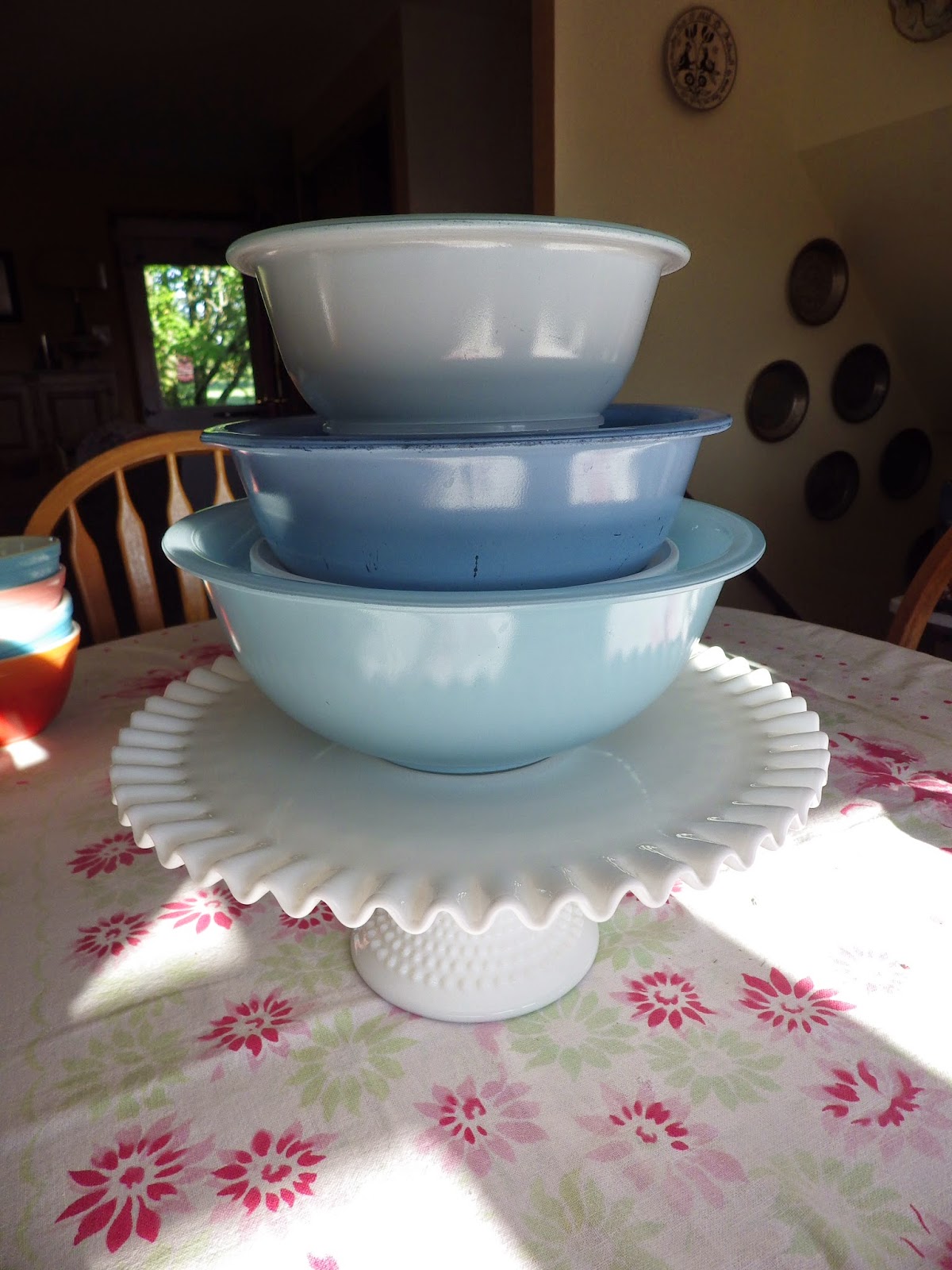 The same day I found this stack of 401s at an antique store. Now, I almost never buy things at antique stores (I mostly window shop- "doing research" I call it) but I couldn't pass up five bowls for $10.  The three primary blues are all unnumbered; two are in good condition, but one is pretty poor. (I'll make that a daily user, maybe I'll dishwasher it into a faux opal?) I am always trying to make up other Primary sets to go to the booth, and can definitely use the good ones. The pink is poor as well, but this is my first pink mixer in the wild, and it will display OK for now. The orange flameglo is pretty good; I haven't decided if I want to keep it yet. 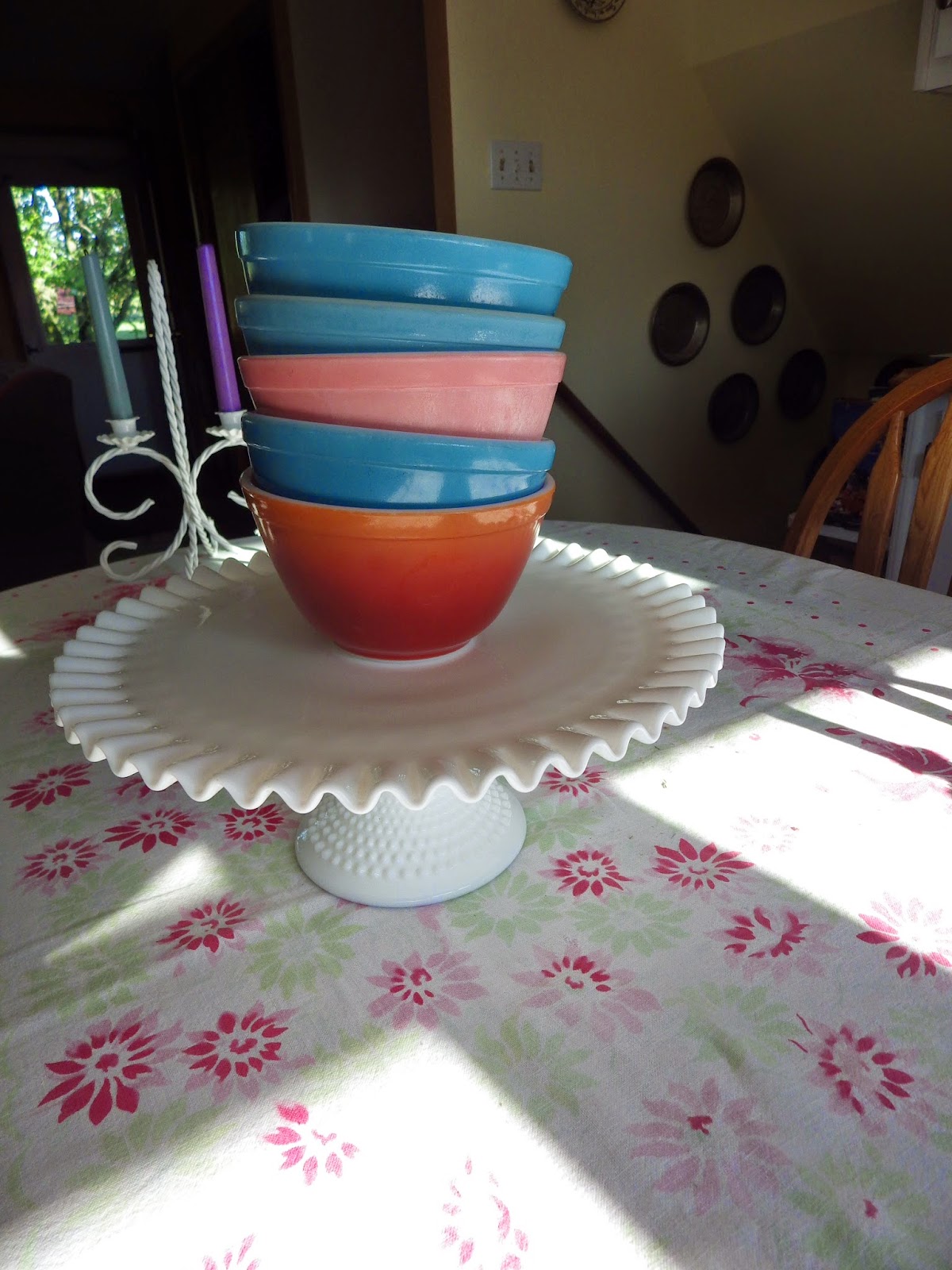 I also found my first piece of JAJ in a thrift store, a pattern called "Tuscany Vegetables". Altogether, it was a good day for Pyrex, with the clear bottom set, the stack of 401s and this JAJ all coming from two stores that day. Plus, these huge veggie salt and pepper shakers- I love Mr. Corn's jaunty moustache! 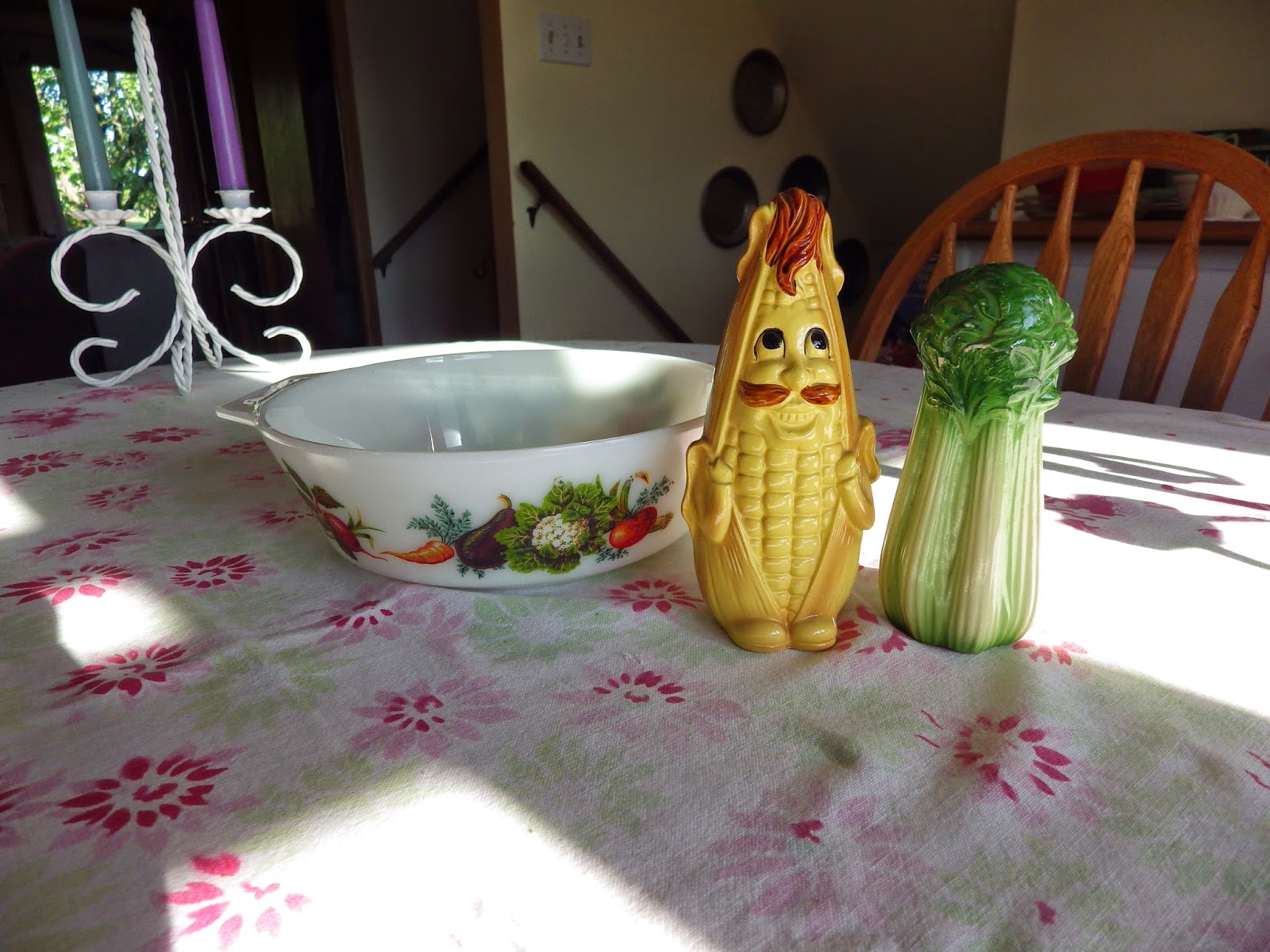 Last week I went to a great yard sale- it almost made The List. (I keep a mental list of the top ten yard sales I've ever been to- this one was somewhere in the top twenty, for sure.) It was my favorite kind of sale- an older person in an older house in an older neighborhood. I bought some Pyrex, some other glass and the coolest lamp.

The Pyrex I bought was this snowflake 043, which came with a lid and is absolutely mint. I almost didn't buy it- it seems that the word has gotten out, even to the little old ladies, that Pyrex is collectible. The sticker on this had a price of $5, which the cheapskate in me thought was too much for a yard sale. Then I came to my senses and realized I would probably pay that or more in a thrift store in a heartbeat. And I didn't have this color in my collection yet, either, so duh...buy it! 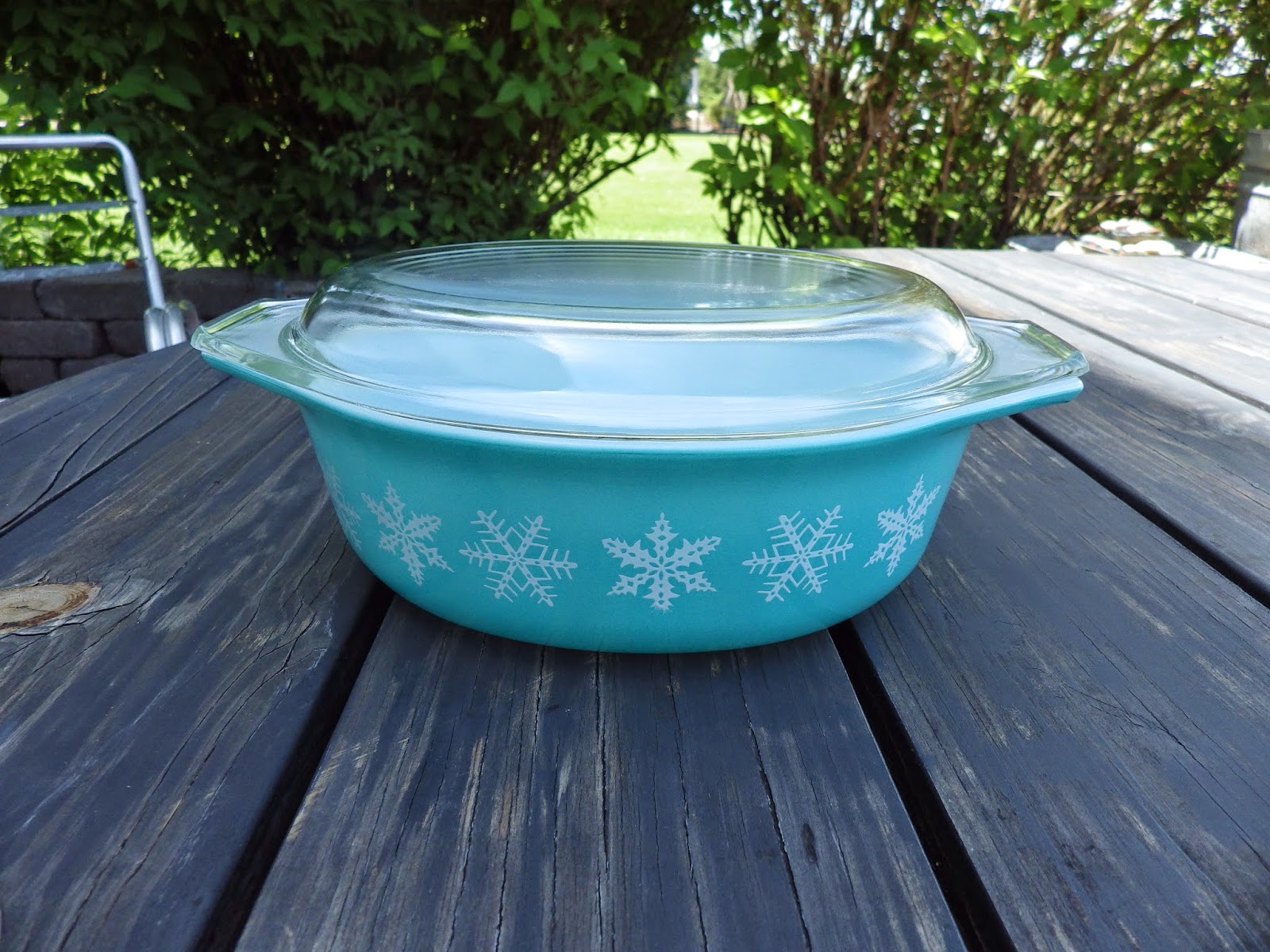 And while word has gotten out about Pyrex being hot, apparently Hazel Atlas is still flying under the radar (at least at this yard sale). The pink, turquoise and yellow plates are all HA, as is the matching mug. The green is FireKing jadeite, and get this- they were all 10 cents each! 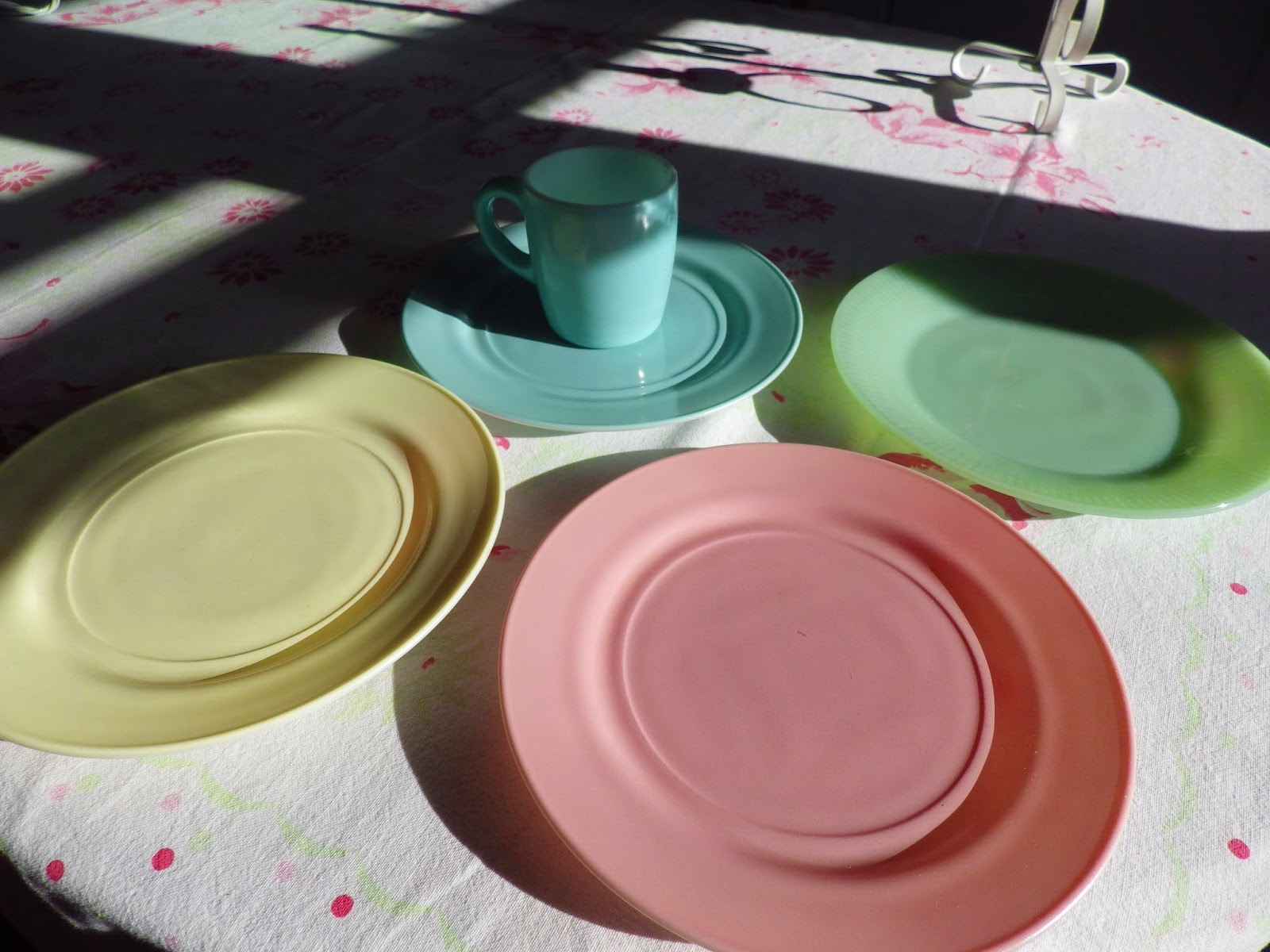 Then I bought this lamp from the same lady. I used to see these around every so often, years ago and never bought one. But they are few and far between anymore, so I popped. Good thing I did, because they are going for crazy money on Etsy! So guess where this is headed, LOL.... I also found a cool angular fiberglass laced shade, which for some reason I didn't photograph. I have quite a collection of these shades anymore; I never leave one behind that is in good condition and reasonably priced (like 50 cents!). Now I need some  more cool lamp bases to go with them! 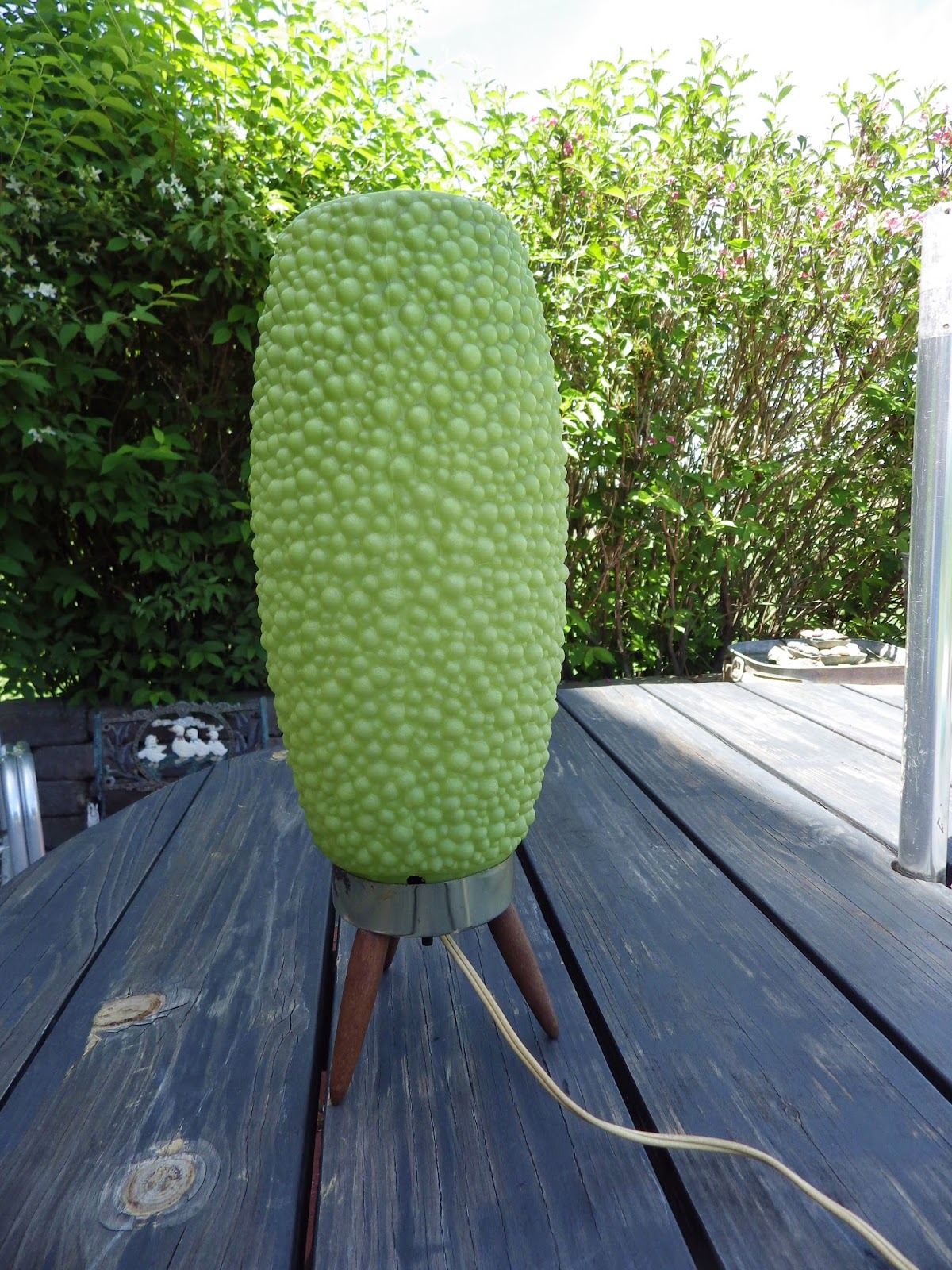 Green seems to be a theme of my finds as well- on the same day I bought this vintage tablecloth at a thrift store. It still has its Simtex tag on it. Plus, it is large enough to fit my table- not always so easy to find in vintage linens! 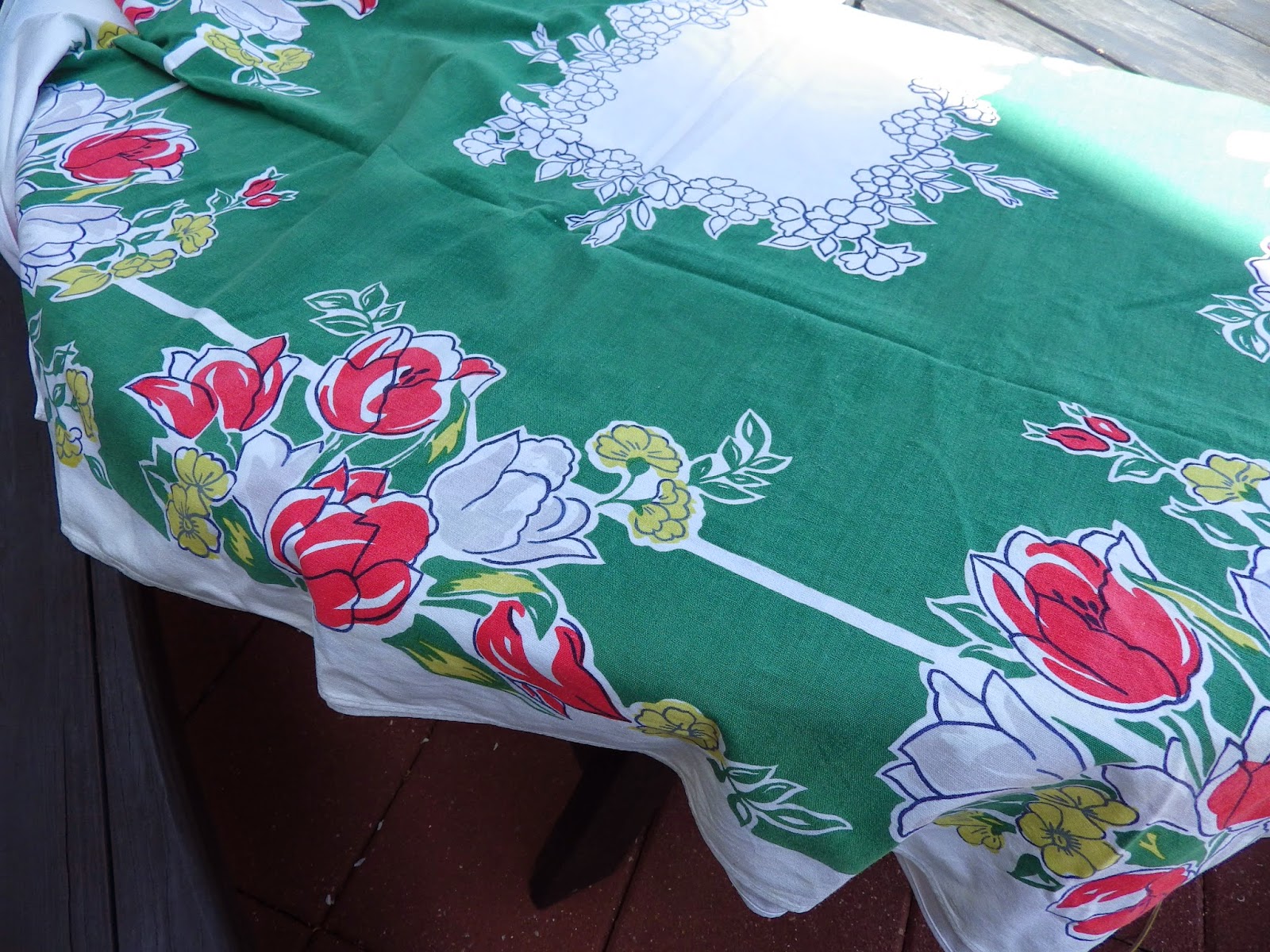 And a little bit of green Pyrex, of course! This is the "Green Salad" promo from 1972, otherwise known as "Square Dot". Normally it is hard for me to get to thrifts right when they open, which I have always assumed is the best time to go. But this day I was able to get there early and found this gem on the bottom shelf. (And I did look all over for the matching salad utensils, to no avail.) It is absolutely mint and I love the color shading. Seeing this online, I never thought I would go for it, but in person it is stunning. For some reason lately, I am totally drawn to the brightly colored Pyrex- like Friendship and New Dots, and this will fit right in. Definitely going to keep this around for a while! 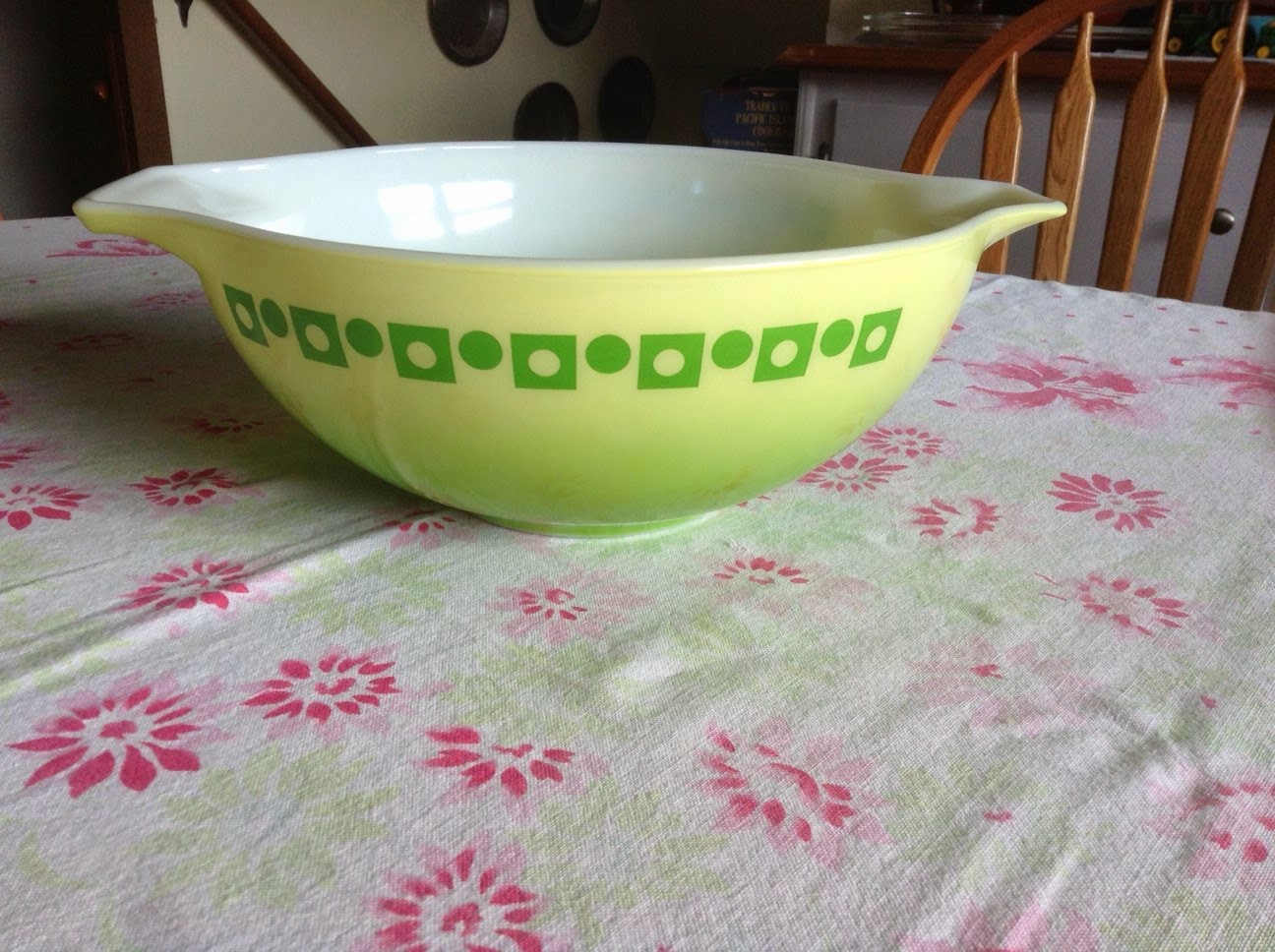 And  how about this amazing fan? I found it amongst the appliances at a thrift store. It was a little more than I like to spend, at $20, but it works great-totally a keeper! I just keep telling my kids not to put their fingers anywhere near it; a trip to the emergency room is not the kind of excitement I'm looking for this summer! 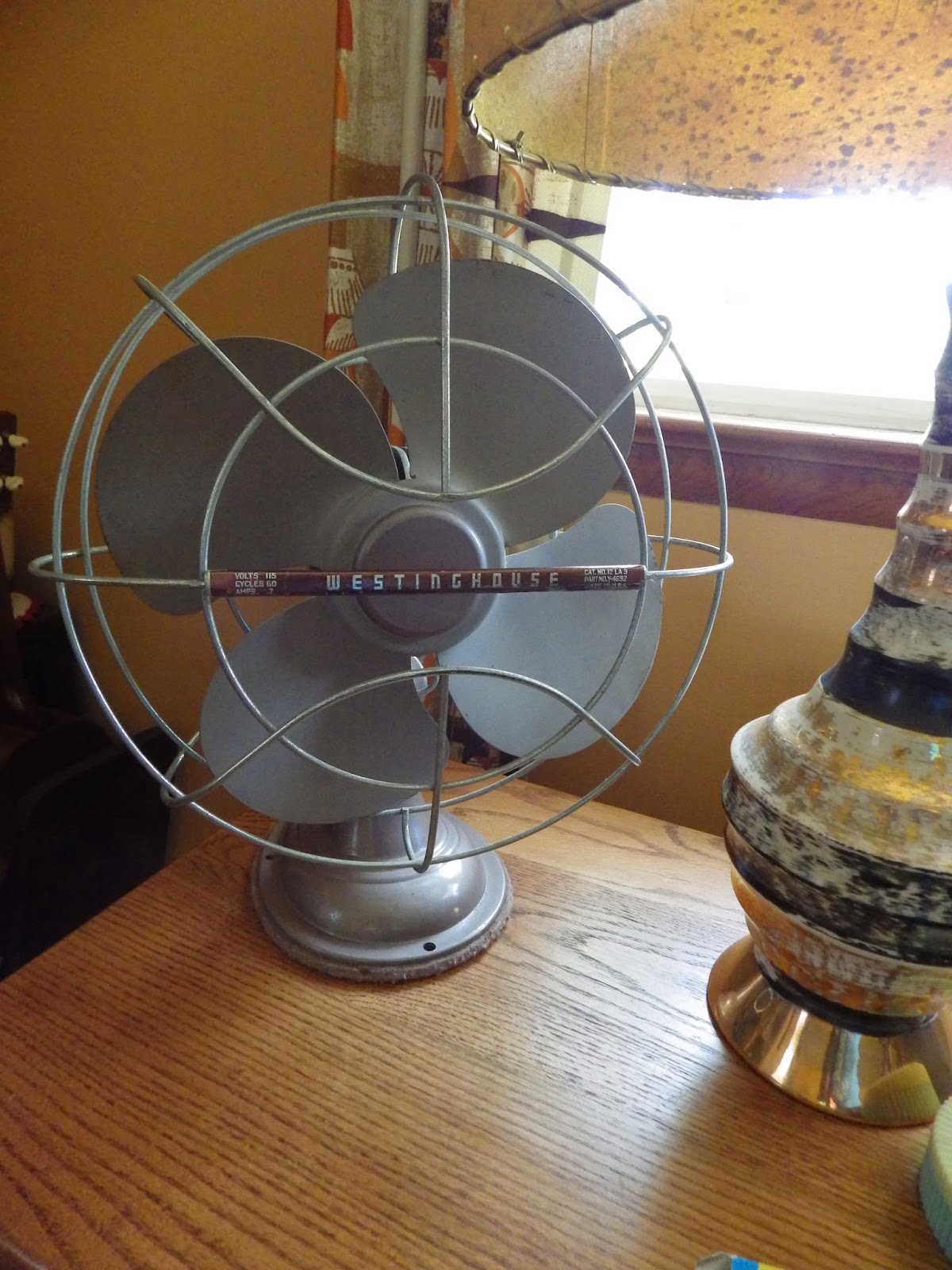 Posted by SusieQT at 9:21 AM 6 comments: Links to this post

Pyrex in the Wild

I don't know about you, but I have been a bit dumbfounded watching some recent ebay auctions for Pyrex. Even things that are not really rare (hello, Pink Stripe 403) have been going through the roof. So with that in mind, I have decided to keep my Pyrex hunt on the ground, so to speak, and only buy things in the wild. To me, that means thrift or yard sales- I suppose antique stores would count, but I am trying to get things cheap so that mostly leaves them out.

Like most of you, things are hit and miss. I do find good stuff in the thrift stores, but a lot of times I come up empty. I go a lot, though, so I'm bound to find something one in a while. Usually I hit up 5-10 stores a week, some multiple times, but I probably only average about one piece a week. Then there's church sales and yard sales, which are also usually feast or famine- mostly there is none, but occasionally you hit the mother lode and can buy multiple pieces.

Since it's been a while since my last post, here are some of my recent ITW finds: 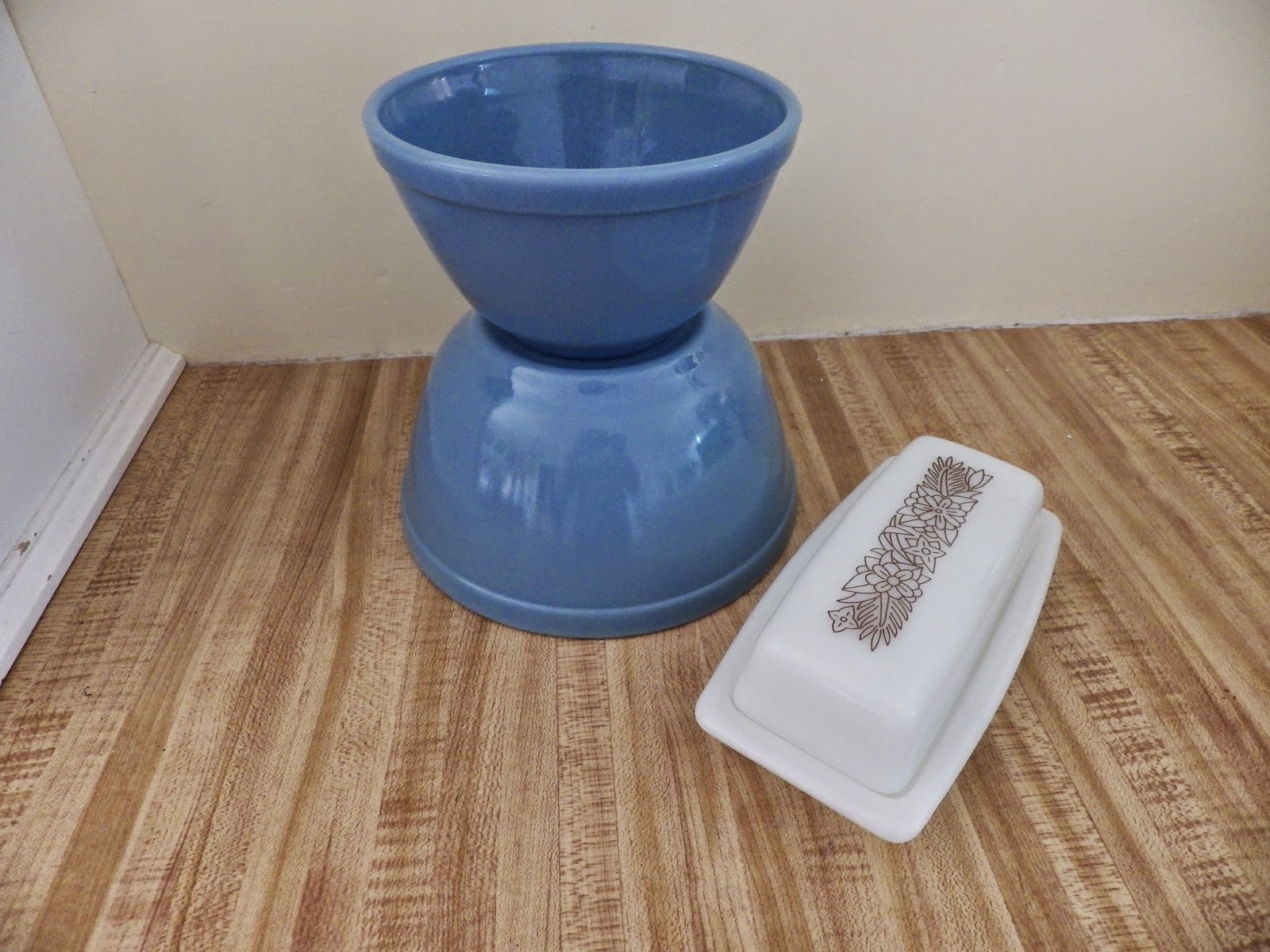 I found this delphite 401 and 402 at a thrift store. I actually overlooked them the first time I walked  by the shelf- probably because I was looking for patterns on white, not blue! And they were really priced reasonably; my guess is the thrift didn't know they were Pyrex because of the color. These are actually duplicates for me- of course, I bought mine online a while back thinking I would never find them ITW! The woodland butter dish goes into my collection of butter dishes- I only need the Autumn Harvest, Snowflake Garland and the elusive Sandalwood to complete them. 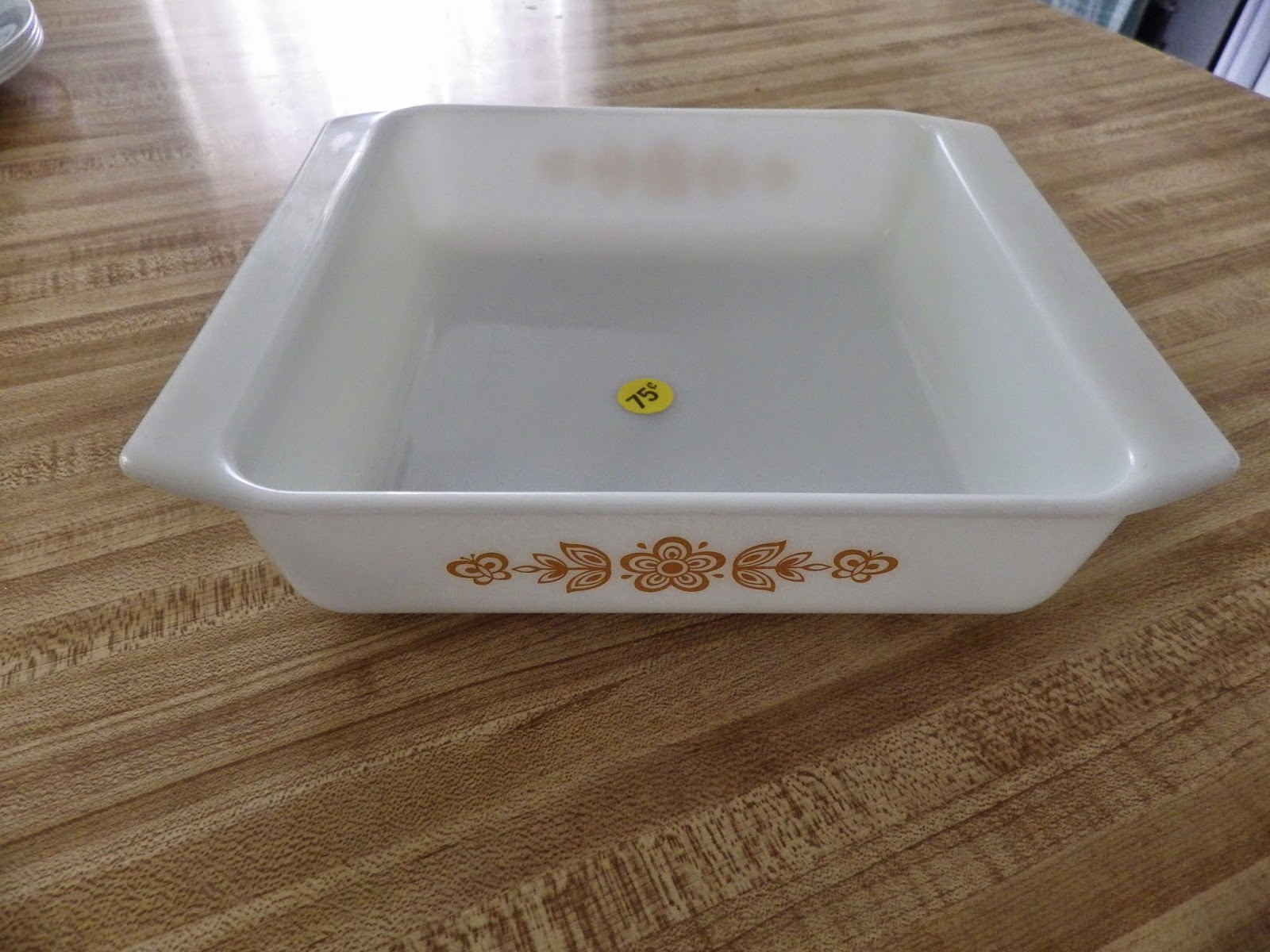 I picked up this Butterfly Gold 922 just this past weekend at a yard sale. I love to haggle, but I didn't even bother with this one- 75 cents was cheap enough! 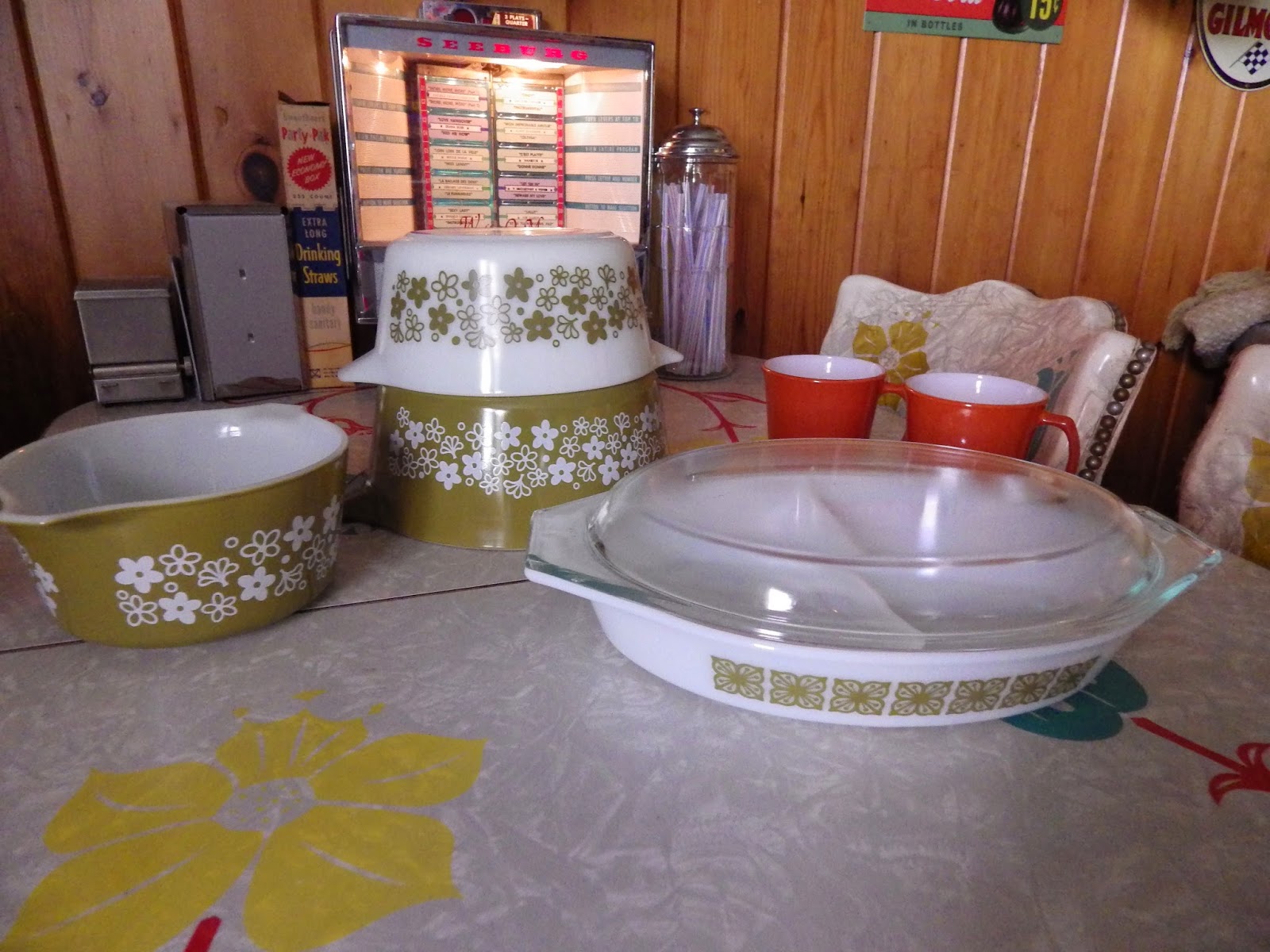 These are a (very good) week's worth of picks- the Spring Blossom casseroles (475, 474, 473) were all found as a set. The Square Flowers divided dish was found at another thrift- not my favorite pattern, but the price was right and it had a lid. I almost dropped this piece in the store- somehow I caught it with my left hand at the last minute. Gah- heart attack! The cinnamon mugs are my favorite color and match my Autumn Harvest, so they will get a lot of use. 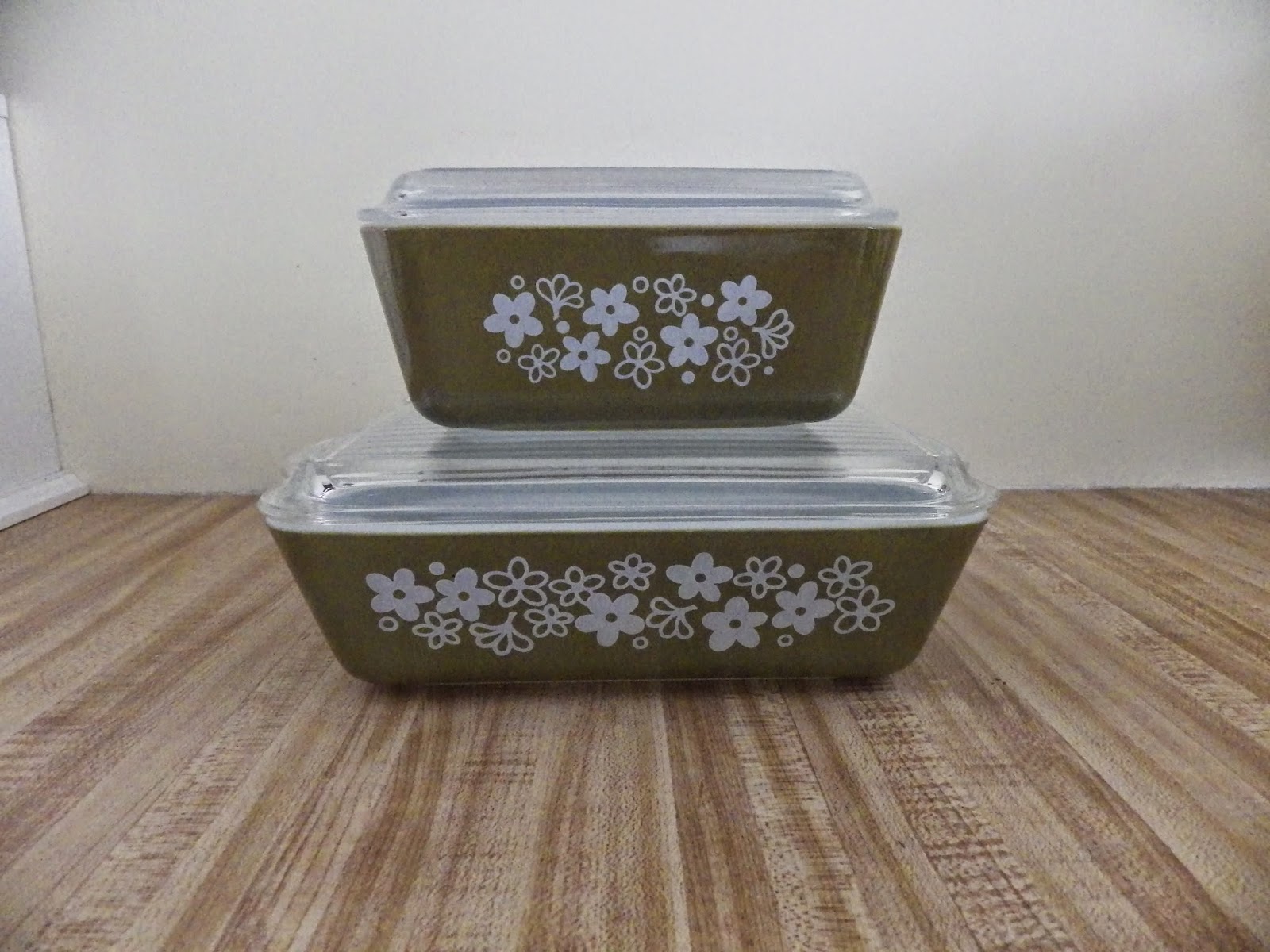 Spring Blossom just seems to be following me home lately. I have a 'no fridgie left behind' policy, as long as they are in good shape and have lids- so these joined my collection. I guess I am now trying to get all the fridge sets... ;) 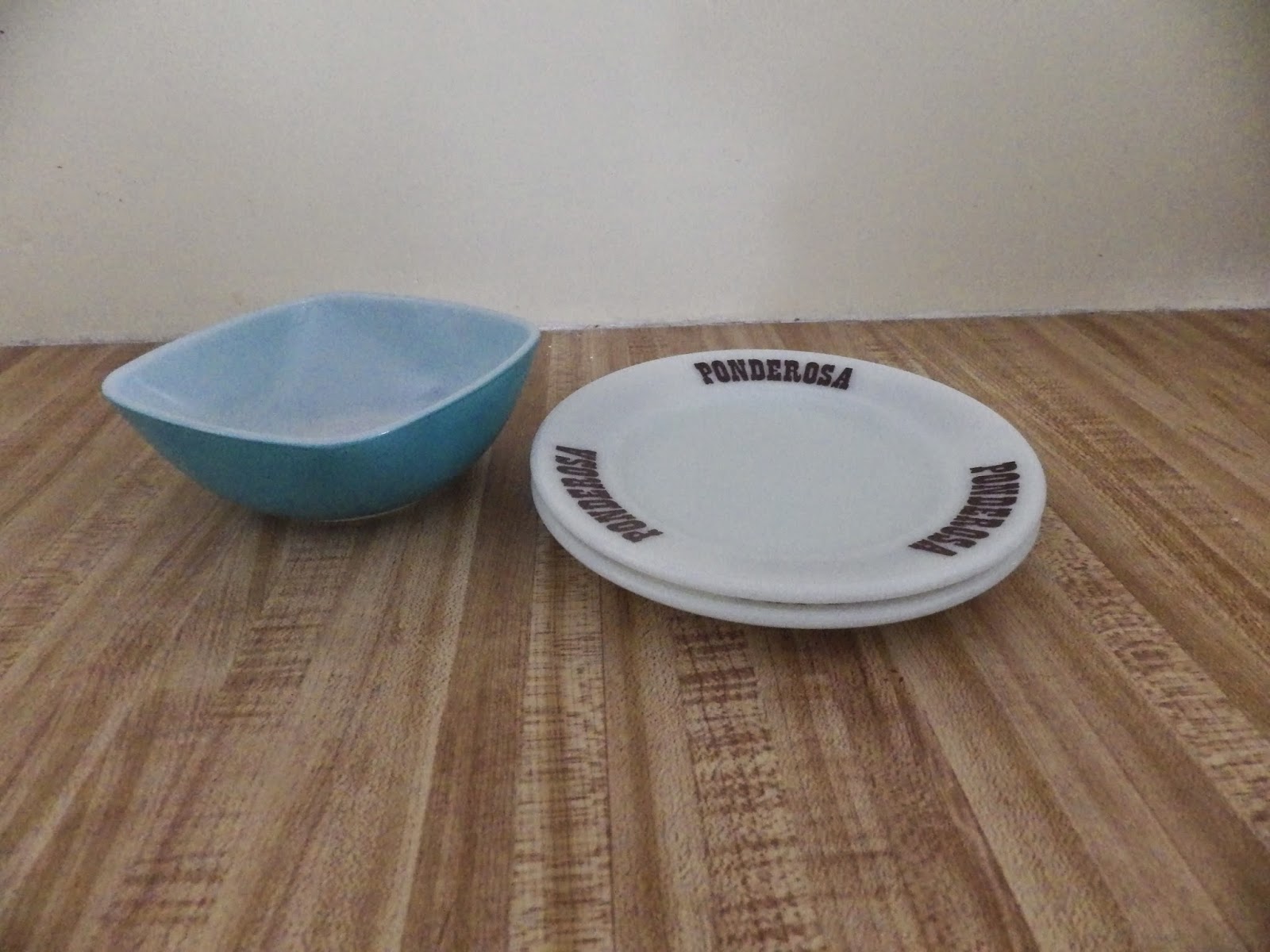 I have seen the Ponderosa mugs, but have never seen plates before. Now I have two- I got these at a yard sale; the lady said her sister had worked at Ponderosa and brought them home. The turquoise hostess ramekin was a big surprise one day at a thrift store- I looked in vain for the chip bowl and bracket but it wasn't there. I have this set already; once again it is not something I ever thought I'd find ITW. 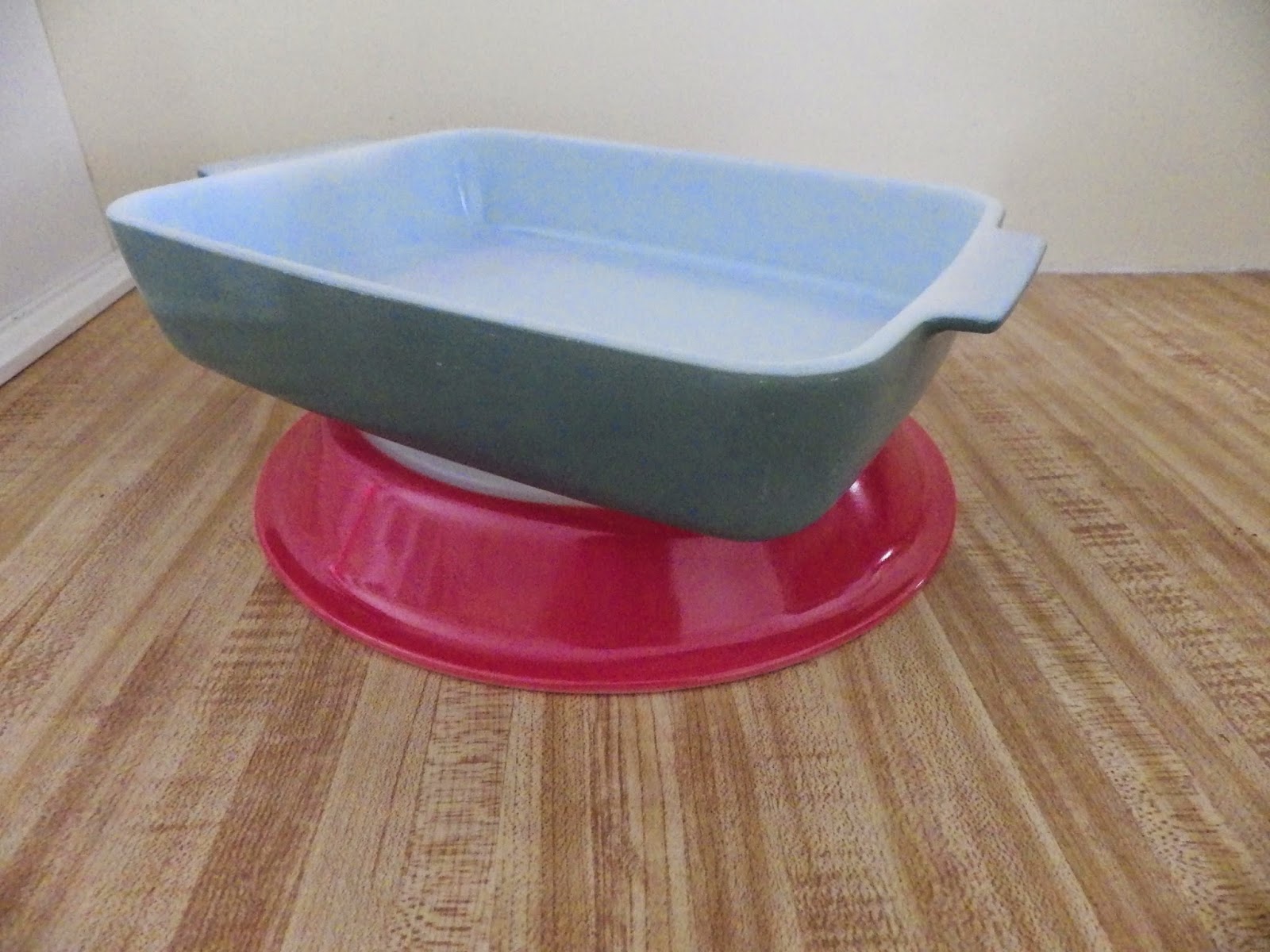 I am most happy about these two! I have never seen a pie plate and I have been looking for years. I know they're not terribly hard to find, but for some reason they had been eluding me. This flamingo one is mint and I found it in the same thrift as the Heinz promo, and also found four Fire King Blue Heaven Cinderella bowls. That was a great day! I totally stalked a lady that had picked up the Heinz and carried it around all the while she was yapping on her phone. Finally she set it down again and walked away and it was mine. I have almost bought this piece online on several occasions.

So that's about it for my recent in the wild Pyrex! It goes to show that there are good things out there, you just have to be persistent and frequent at the thrifts, I guess.

Posted by SusieQT at 10:35 AM 3 comments: Links to this post