....to find some vintage Halloween!

Hello Friends, hope your Christmas was Merry and your New Year Happy! I had to pop in and share with you a major thrift score from this past week! As you all may know, thrifting knows no season, and the best finds are usually out-of-season gems!

And so it was for me. I happened to take a trip to my favorite thrift store a few days after Christmas and of course, I didn't buy Christmas stuff (that is all long since picked over!) but in the back of the store by the kids' stuff I found these! 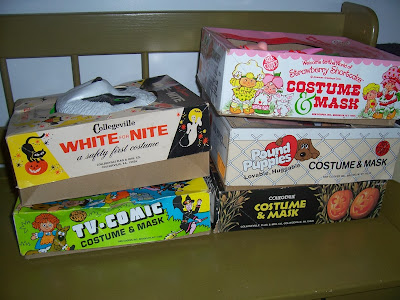 Five vintage costumes still in their boxes! All are from the early 80s and earlier. On the left is a Collegeville Costume (Collegeville is not very far from here, but I had no idea they made costumes there) Panda and a Ben Cooper Raggedy Ann. On the right are Ben Cooper Strawberry Shortcake (the original version from my childhood, not the one my daughter is familiar with, LOL), a Pound Puppies and another Collegeville Scarecrow. 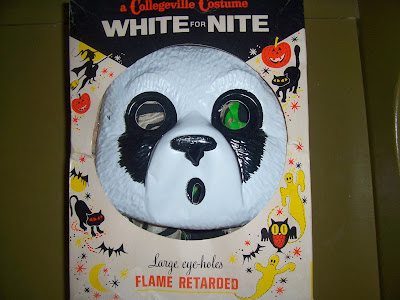 This is the Panda- it is probably the oldest. I'd guess it was from the late 60s, as the costume part is fabric.
My daughter was thrilled to model these costumes for you all to see, and they will be eventually headed to my Etsy store.  I was sorry to have to tell her that she couldn't keep them to play dress up! 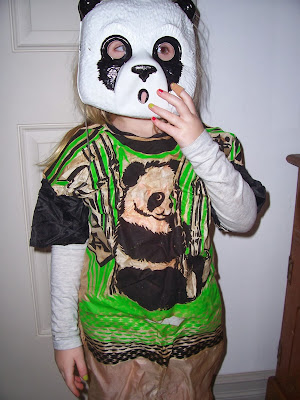 Naturally, this one is her favorite. It still even smells like Strawberry- remember that? I don't think the new dolls do that. I may hold onto this one for her for next year, we shall see... 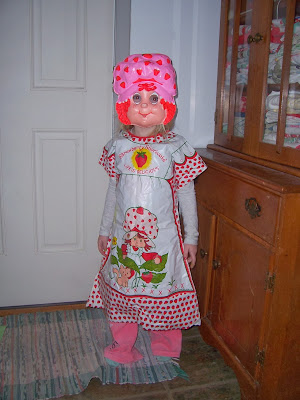 My son, aka "Eagle Eye", spotted these vintage Fisher Price pull-behind trains. He happened to have some of his Christmas money on him, so he bought these to resell. He is quite the businessman anymore. Watch for these in the Etsy shop, and help out an 8 year old entrepreneur! 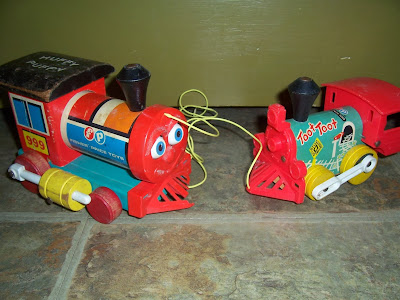 That's it for today, I promise to blog a bit more in the New Year, now that I have got my camera issues straightened out! (Thanks, Santa! :)

I have a few thrift finds to show you. Not as many as usual; I don't know about you, but around here its slim pickins this time of year. 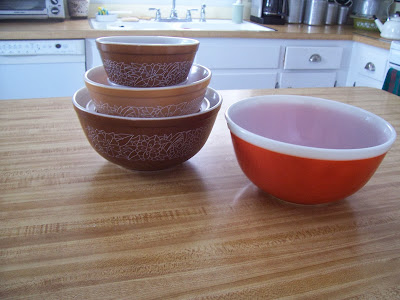 I didn't think I would like Woodland, but it has grown on me. Just the mixing bowls, though. I can still pass on the casseroles and such! These were really reasonable ($8 for the three) so I picked them up. I am trying to find some solid blue Horizon bowls to mix it with- I think a blue and brown set would really look sharp. The one on the right is an Americana fall colors 403, which I definitely love. Gonna have to find the rest of this set!

And speaking of fall colors, I found almost all of the Autumn Harvest Cinderella set the week before Thanksgiving!  In a thrift store- I mean, who donates these things the week before turkey day? Everything but the rust colored 442, and they are in great condition for $12.99. I am almost done with my AH- just need this 442 and the 402 from the mixing bowl set. I also treated myself to an early Christmas present and bought a fridgie set on Etsy for a super price. 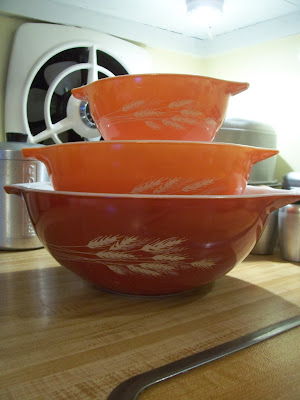 I also found 3/4 of the primary fridge set with old-style lids! I happened to have an extra yellow 503 laying around, so that completed my second set of these. But I don't have the space to keep both, so these went to my booth. 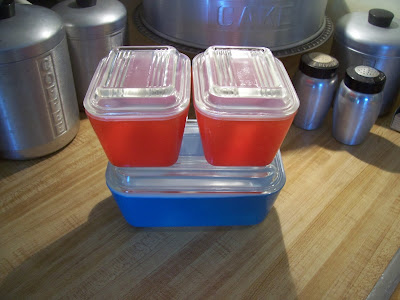 I also got really lucky right after Thanksgiving- I was in a little tiny town that had a ton of junk shops and found my first ever 933 lasagna pan! It was only $6, but I am not a fan of Butterfly Gold, so I ended up trading this one. I also found a red 404 for $8 which I am keeping- for some reason I don't have a picture of it, and my camera is barely working so it's more hassle than it's worth to take one. (It's also super hard to blog with it, so that's my excuse! :) 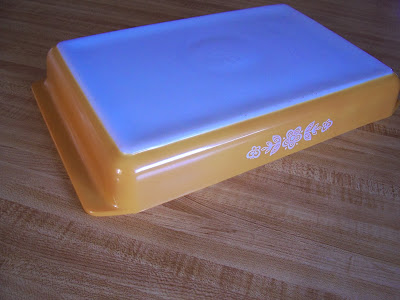 It's not all Pyrex goodies, though- 'tis the season for vintage Christmas! I don't buy as much as I used to; back when it was still cheap I bought dozens of ornaments for my tree. I think I probably have a gross of Shiny Brites at this point. But these red ones are really neat and were reasonable- will probably be headed to Etsy in the near future!

I also bought not one, but two 4 ft. aluminum trees from the same thrift store! I think I paid about $35 for both. I took both over the the booth, and never got a photo of them completely assembled, so I'm sorry I can't show you.

Speaking of my Etsy shop, I added a bunch of new stuff- check it out and use the coupon code PIT20OFF for a 20% discount on everything! 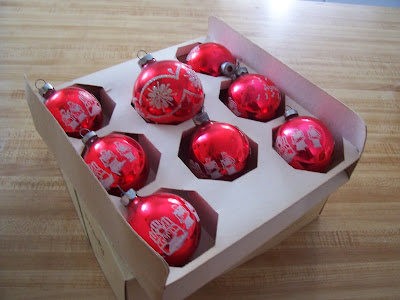 These last two are the only non-Pyrex, non-Christmas things I've bought in probably 2 months.
I love this dog and leaf planter (despite his weird eyebrows) and it is much bigger than it looks here. I'm debating whether to take it to the booth or put it on Etsy. 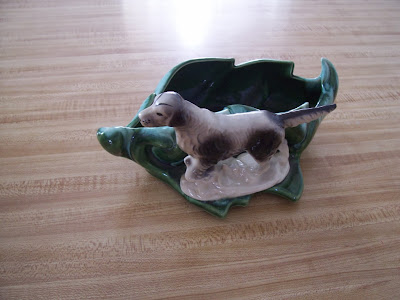 This cool mid century clock is also a lot bigger than it looks! I can totally see this in someone's retro 60s/70s kitchen or living room. It's probably 18 inches in diameter and works, too! Most likely going to booth because I don't want to have to ship this! 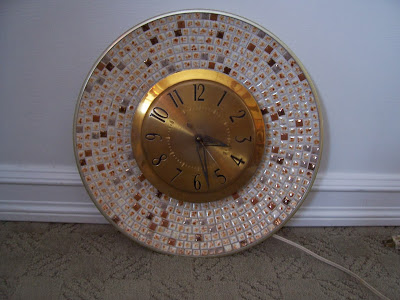 Well, that's about all the news that's fit to print. Have a Merry Kitschmas!