Hello friends! I thought I'd do a quick post on some of my recent thrift finds. I've been having pretty good luck lately. And it seems like I have more time to shop than to blog about it, so I'll try not to overload you with stuff (even though my house is bursting at the seams while I get it all ready for my Etsy store and my booth!) 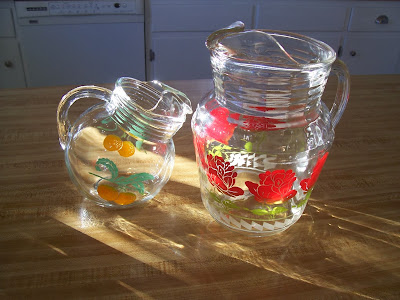 First off are these printed pitchers. I mentioned before that I collect printed glassware, and am always on the lookout for the pitchers that go to the sets. Seems like they are always hard to find! So I was stoked to find the one on the right, especially, because it matches a set of glasses I have, and I have been looking for this one a long time.

The little ball pitcher on the left has a funny story to go with it. It was so cute, I couldn't leave it behind at the thrift...but unfortunately I did. I actually took it up to the register and paid for it, and then the ladies running the counter forgot to put it in my bag. (I am certain it was an honest mistake.) It wasn't until a couple days later that I realized I didn't have it. So I called up and described the situation and the manager said I was welcome to come in and get my money back (they couldn't find the pitcher). I got to the store and found the thing back on the shelf! I still had my reciept, so of course I got to take it home with me this time. I don't have the matching glasses for this one, though, so it's going to the booth. Of course I will probably find them as soon as I sell it... 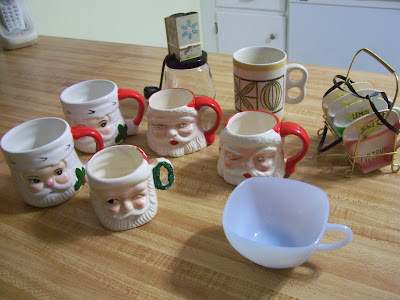 I found all these mugs on one epic thrifting day. I took my daughter to a birthday party, and while she was there, my son (aka "Eagle Eye") and I hit up a few thrifts we don't normally get to. The bluish on in front is Fire King Delphite, which I have never seen in person before. The Santa mugs behind it actually have rhinestones in the open eye (the other is winking shut), which is kind of creepy to me, but these sell well in the booth. The item on the far right is a set of teabag holders in their original stand. Eagle Eye spotted those, because I have a set at home which I bought off of Zootsuitmama's Etsy shop. He recognized them and so for 65 cents, thought it would be something he could buy to resell. He's always trying to make some money!

And as always, I am on the lookout for two things when I thrift- Pyrex and camp blankets. And I found both just the other day! 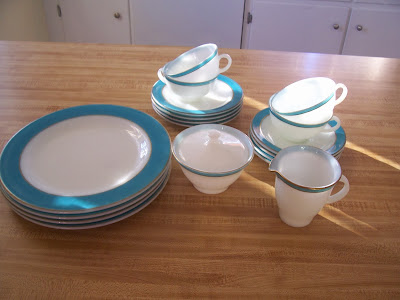 I hit up my usual Tuesday thrift stop and just got a "Pyrex vibe" as soon as I walked in. And when I got to the housewares, there was nothing! For once, I doubted my instincts. Big mistake! Because when I got to the dishware aisle I found a box of Turquoise Gold Band 4-pc place settings, plus the sugar and creamer (with lid!). There is 4 total settings, each including dinner plate, salad plate, cup and saucer. A couple of the dinner plates have some scratches, but the rest is pristine. It was a total of 19 pieces for $12. They are so pretty, I may just have to collect the rest of the set- and I already have the vegetable bowl. 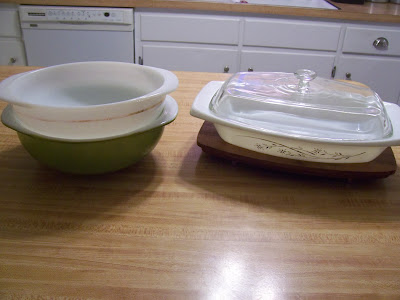 These pieces of Pyrex also happened on the epic thrift trip with Eagle Eye. The 024s on the left were so cheap I couldn't leave them behind (49 and 99 cents) and are a size I use frequently, even though I'm not fond of the colors. They are in great shape, too, except for some wear to the gold band. The opal gold band 024 and the opal promo 023 with cradle I found last time mean that I only have to find the plain opal 024 and I will have the whole set of that style.

The Golden Honeysuckle on the right was something of a reclamation project. I have seen this pattern before and passed it up (not big on the gold designs) and it is an unusual shape (i.e. doesn't stack!), so I had no reason to collect it. But I have never seen one with the optional walnut stand, and it was a neat piece with the lid and stand. Unfortunately, the dish itself was completely covered in silvery metal marks, like someone had scrubbed it with steel wool. It was only $5, though, so I thought I could at least salvage the stand and lid if not the dish. But a little BKF worked wonders on it and it is nearly as good as new! I couldn't believe it. And I have found myself using it quite a bit since I got it- it is the perfect size for my favorite winter dish, roasted brussel sprouts and the stand makes serving easy. Now I understand why so much Pyrex came with cradles or stands- they are really versatile! 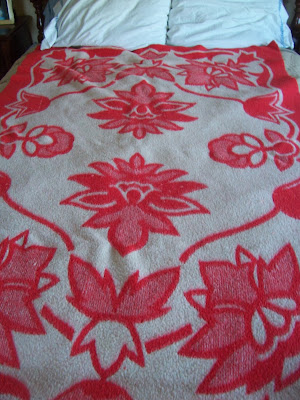 And lastly, after the Pyrex aisle, I always cruise through the linens looking for camp blankets. I found this really neat one the other day. I have never seen one with such a bold pattern- it really reminds me of vintage Scandinavian textiles. Like all camp blankets it reverses to the opposite color scheme (what is red is white, and white, red, when you flip it over). But unlike most camp blankets,which are usually cotton (and machine washable), this one apparently had a high wool content, which wasn't really obvious until I threw it in the wash. Fortunately the blanket didn't shrink much (it was a single/twin to start with) but everything else in that load got covered in fuzz, and my lint trap was so loaded with red lint I was worried I might have a fire. But at least the blanket is clean! And super warm, which is good because it's really getting cold around here- perfect for snuggling up in a vintage blanket with a cup of tea in a Pyrex mug!

Posted by SusieQT at 9:06 AM 8 comments: Links to this post