The Return of Trash-picked Tuesday!!!!

Well, since the kiddos went back to school yesterday I finally have a chance to get to work on some of my personal projects. I have so many things that I get started and then never finish because I get interrupted, or have to run out and do something, etc., etc., ad nauseum...

And one of those things is blogging!

So, longtime readers may recall that I spent a whole year (2011, 2012??? I forget) doing posts on trash-picked or free items every Tuesday. I am never above trash picking a great find or at least something that needs a little work to be cool. Even now that my kids are approaching pre-teen years and this probably embarrasses them soooo much.  Hehehe...

Last week we took the kids down the Shore for a day and on my way down there I noticed an old springer/motel chair out for the trash. It wasn't just sitting there; it looked like it had either fallen out of someone's truck or someone had jumped on the seat and caused the whole thing to collapse. I figured if it was still there later on when we came home I would grab it. And so it was.

Like a bad blogger I neglected to take a picture of it "before"..., but imagine this chair with the legs completely collapsed and almost touching the bottom of the seat- sort of like it was folded in half. (which was kind of a good thing, because I don't think I could have gotten it into the car, otherwise.) Also, the top was faded red and the bottom was faded so badly it looked gray. There was plenty of rusty spots on the legs also. 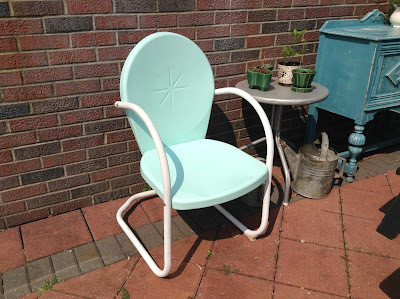 We managed to get the legs about 85% straightened out, and everything sanded and primed. Then after I put the kids on the bus yesterday, I went out and chose this pretty color of blue, Rustoleum's Ocean. Several coats on the seat, and some white on the legs and it was ready to put back together. I think it came out pretty well for something left for dead. 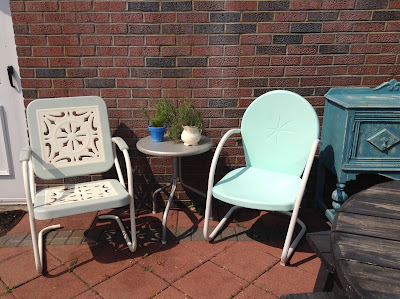 And here is it with its life partner- eventually I will paint the other chair to match!

Posted by SusieQT at 4:35 PM 4 comments: Links to this post