Since my kids go back to school in the next few weeks, we took one last thrifting adventure as a family today. And as much as I never thought I would say it, it will be bittersweet to go thrifting alone the next few months. My son, aka Eagle Eye, is always such a great help, and believe it or not, my daughter was actually good and did not cause me much stress until she started whining about how hungry she was (OK, it was past lunchtime and she is four, after all.)

I was glad we went today; I really think we got some great stuff. And now with both an online store and an antique mall booth to stock, I really have a good excuse to buy stuff!

First was this embroidered fish with felt and bead flowers. I've bought a couple of these types of artwork lately for the booth. I don't know if they are going to go over well with that clientele or if I need to eventually list them on Etsy. I really love it though, and hope some others do as well. 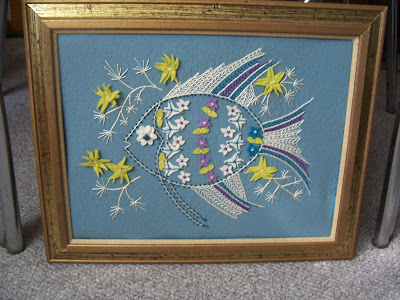 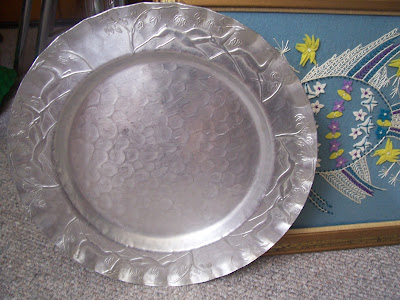 I picked up these ceramic mugs at a Goodwill on a recent trip to Lancaster. I think they were both 97 cents. The squirrel is just too funny. This print I bought for myself. It is going up to the cabin (where I need to do a little re-finishing of the frame as well.) It was ony 99 cents and probably dates to the 1940s. We have a bit of a bird theme going on in the bathroom. ;) 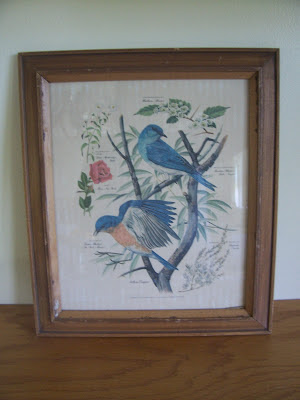 I couldn't pass up this chalkware planter for $2.00! It's in fabulous shape and gigantic- and heavy. Definitely going to the booth- I'll put some fall goodies inside and hopefully someone will take it home with them! 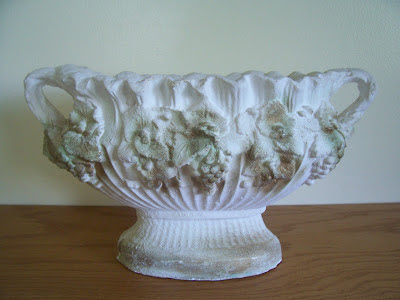 I have had a bit of a Pyrex drought lately. I think it's pretty well documented that thrift stores and private sellers are onto those of us that collect it, so when I do find it, it's way overpriced. But every once in a while I find some for a decent price. This Early American 401 mixing bowl was $1.97 at the Lancaster Goodwill. It's not a pattern I collect, so will be heading over to the booth. Incidentally, I saw a 403 for this set today at the thrift store- they wanted $17 for it. No thanks! (I also saw a set of Woodland mixing bowls at the same store for like $35- obviously they are still there.) 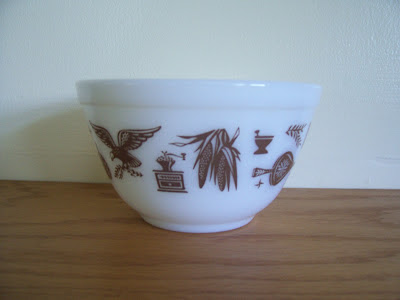 I bought this mint condition yellow 501 fridgie at another thrift store. I think it was $2. I always buy these if they are reasonable, regardless of pattern. I use them to store all kinds of things, mostly condiments and small bits of garlic, etc. And since I do collect primary, this was a no-brainer. 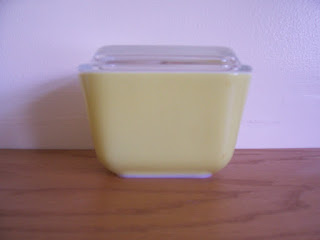 This was a bit of a splurge at $5, but I have never had a patterned lid casserole before. I do love the green color and it was in great condition underneath a boatload of grease and dirt. It's a 1 qt bake/serve/store casserole in a promo design called "Vintage" (apropos, no?) and supposedly came with a cradle, which I will have to find now! Interestingly it's from the same store with the crazy prices above- just goes to show that sometimes different people price things very differently, even at the same store! 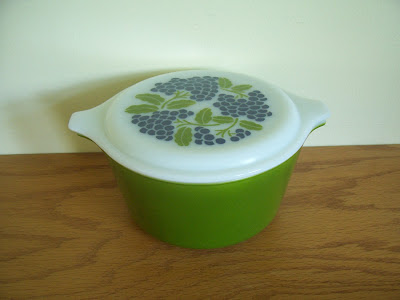 These last shirts are huge scores and will be listed in my Etsy store shortly. Almost makes me wish I wore Hawaiian shirts because they are so cool. They would probably fit me too, but I'll pass them on to someone who will get some more use out of them.

This shirt is patterned with a motif of all the Hawaiian landmarks of the 1960s- it's like looking at a Waikiki phone book from 1960. There's Trader Vics, Hilton Hawaiian Village, The Embers, etc. all immortalized in one incredible loop-collar Aloha shirt. It is so killer. 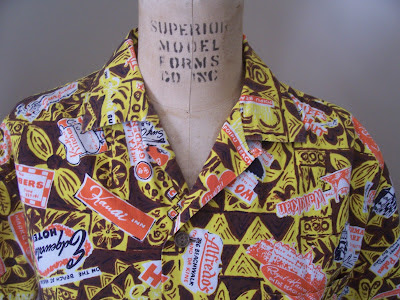 This is from the same lot- the size and cut are the same, but this shirt is red with black and gold accents. It is really nice! Once they are listed, don't forget that you guys are all entitled to a 20% discount in my Etsy store- just use the coupon code PIT20OFF. 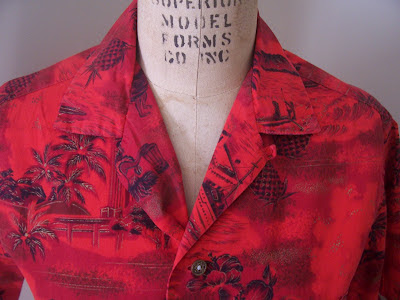 Posted by SusieQT at 5:06 PM 2 comments: Links to this post

Lately I've been doing a little thinking about the difference between being a "thrifter" and a being a "picker". I think with the popularity of shows like "American Pickers", those of us that buy vintage to resell want to glamorize it a little bit and call ourselves "pickers". After all, who doesn't want to travel the country and dig through piles of "rusty gold" for hidden treasures and then make some serious $$$ with a TV show, right? Yeah, me too.  :)

But for the most part, we stick to yard sales, flea markets and thrift stores. And buying stuff cheap that we can resell is still the name of the game and we do alright with it. (See my previous "Secrets of the Hunt" posts on how to do this, if you don't know already...)

But that's not really "picking"; that is, buying things that aren't actually for sale with a price tag already on it. To me, to be a picker, means that you have to find the vintage that's not already for sale and get the seller to part with it. You have to get to know people, knock on doors and just ask around to buy stuff.

More and more, I think this is going to be the way to go for those of us in this business. We all know that it's getting harder to find good stuff in thrift stores and yard sales. Stuff from before 1960 is just no longer that abundant in the second-hand marketplace.

With that in mind, try to think a little bit outside the box when it comes to buying vintage.

1) Make conversation with people. Oftentimes, even close friends and relatives don't realize how into this stuff you are. Even acquiantances and friendly people you see at thrift stores or yard sales. Remember my Giant Lamp? Well, it turns out the lady I bought that from invited me to go through her house and pick out some of the furniture that wasn't for sale yet. I've got an incredible late 1950s hi-fi coming my way from there.

2) Have a business card made. Even in this tech-crazy age, the act of giving someone your card strikes them with a permanence that they remember. They put it aside and when they have something to sell, they can pick it up and give you a call. I had 200 business cards made online for less than $20, and I think they've paid for themselves many times over.

3) Ask, Ask, Ask! The other day I stopped at a yard sale. It was two ladies in their 70s selling a bunch of kid stuff. Now, the last thing I need is more kid stuff. But more than anything, it was the incongruity of the situation that made me stop. I walked through all the tables of toys and racks of clothing and realized this was two ladies who had a children's consignment store they were liquidating. Not really seeing anything I needed, I did notice in the back of the garage was some items covered in old bedspreads. Obviously, they had covered the tools/snowblowers/etc. that were not for sale to keep people from trying to buy them.

However, it wasn't the tools, but the bedspread itself that I wanted: 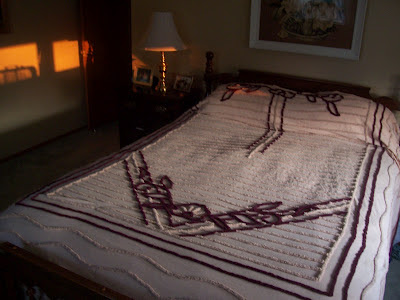 I think the ladies were dumbfounded when I asked to buy the bedspread they covered the snowblower with!  I offered them a few bucks and they happily took it- they had no idea anyone would want something like that. To them, it had no value at all, so to get $3 for it was a bonus- and a win for me! It's a large full/queen  art deco pattern chenille, and in a tan/burgundy color scheme- perfect for my bedroom! (Sure beats covering up a snowblower!)

Posted by SusieQT at 10:56 AM 6 comments: Links to this post

Hello world, it's been a long time! I can't believe how August has flown by. We've had a lot of fun around these parts and it hasn't left much time for blogging. But isn't that what summer is for anyway?

I had the wonderful opportunity this year to meet some of my fellow bloggers in person. For someone who used to be fairly shy and introspective, this is a big deal. I think a lot of us get into blogging to try to express our outward desires and passions to a larger community of friends than what we can cultivate right in our hometowns. I don't think I really thought about that consciously when I started this blog, but it has definitely been true. I love the community I have found and it seems only natural to try to meet some of the other bloggers who are withing driving distance.

So, my summer has been a bit transformed into a journey of new friends and new opportunities. I have been a huge fan of MaryDeluxe's blog Welcome to Deluxeville since I started blogging. I loved her style and personality, which come through so clearly on her blog. Well, lucky me, she lived nearby and we got to emailing and finally had lunch one day. And both being somewhat hoarders of vintage :) we decided to open a booth together in an antique mall.

It's been an adventure so far and a lot of work, but most importantly, I've gained a great new friend!

I also had the opportunity to meet up with another fellow blogger last week while I was on vacation up at the cabin. I loved following MissCherryBubbles' blog Past Life and hadn't heard from her for a while. I knew she wasn't that far from the town where our cabin is and decided to try to get together.


Well, that was a great idea! We hit it off right away and had a great time together. I think the little luncheonette had to kick us out because they wanted to close for the day- so we took ourselves across the street and did a little thrifting. What could be better while on vacation?

It's great to meet fellow bloggers in person and make some new 'real' friends- as opposed to virtual, or 'imaginary' friends ;). I highly recommend it.

Posted by SusieQT at 9:49 AM 9 comments: Links to this post