It's been a busy couple of weeks here at Chez QT, so here are a few snapshots of some of my vintage Christmas decorations. (Forgive the dark shots, it was nighttime and my camera is not a good one!)

This is the decoration on the back of my front door. Mercury picks, reflectors, glittered pinecones- all original! 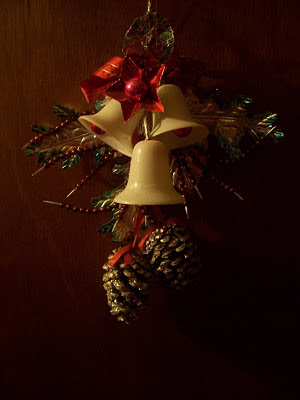 My Christmas blow molds. For some reason I have not been able to find a snowman- yet- but check back next year! The pair of angels I actually bought deadstock from Sines. 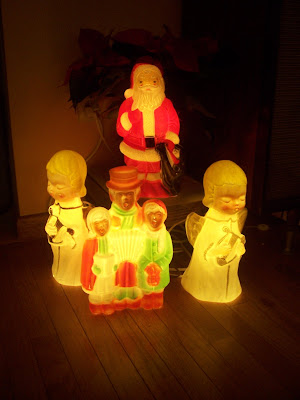 I have a pair of these vintage stockings- aren't they cute? 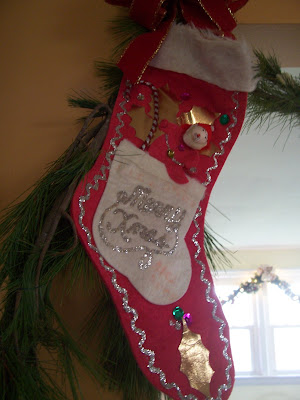 I decorate our live tree with only vintage ornaments.
I love looking at them- I could look at these all day.... 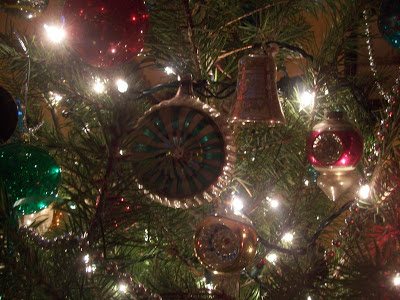 These are really huge- that blue one in the lower right is regular size! 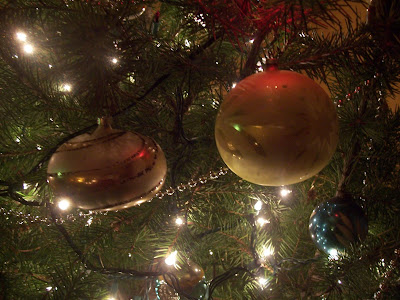 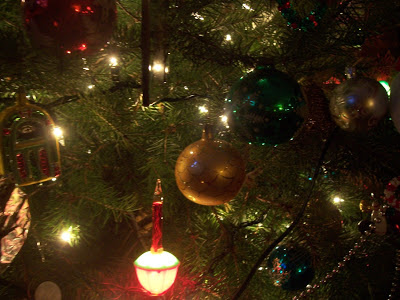 My aluminum tree- it's only 2 feet tall. I decorate around the bottom with vintage aluminum corsages. The tree topper I just found this year. (See my Pyrex trying to sneak into the picture?) 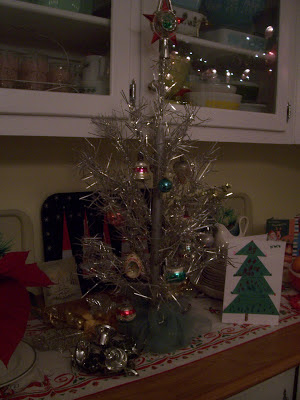 Some of the ornaments on the aluminum tree. I love these homemade eggshell dioramas. All of these ornaments are vintage miniature size ones. 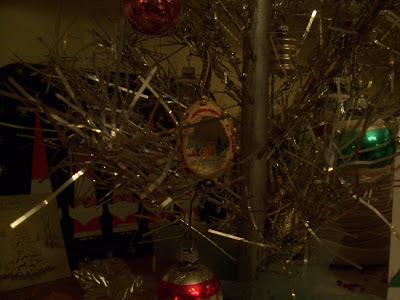 Some of these balls are really tiny- the one in the center and the one at lower right are only about
an inch in diameter! 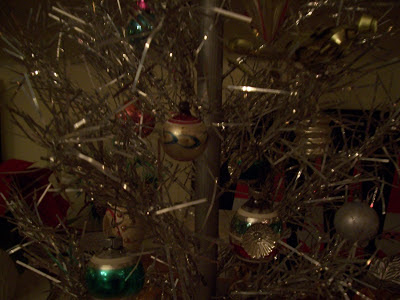 I actually have vintage window candles too- these have red and green bakelite bases with red cardboard tops. 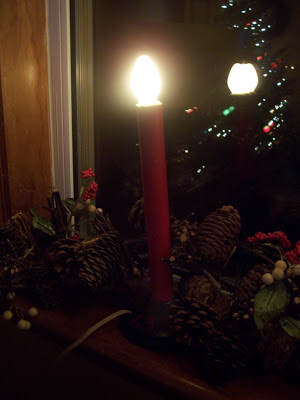 Hope you had a very vintage Merry Christmas!
Posted by SusieQT at 10:48 PM 8 comments: Links to this post

I was just lamenting the lack of Bakelite in the thrift stores back in the summer. Then I had a few finds and my luck has changed! Good thing, because there is nothing I like finding more in a thrift store than Bakelite (yes, even Pyrex, although that is a really close second!) I don't know about you all, but I can't afford internet prices on Bakelite, so I have to get mine the old fashioned way.

And this first one was really done the old-fashioned way- digging through stuff at the pound store! 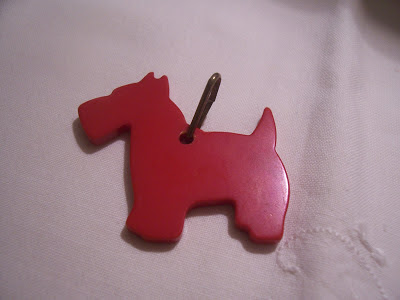 This cute red scotty was actually a zipper pull on a kids' outfit. The outfit looks to me to be from the late 60s/70s- it's double knit polyester with a scotty motif. In and of itself, the outfit is cute enough that I bought it to resell, but the bakelite zipper pull will be far more valuable. It's pretty large- 1.75 inches from nose to tail- so I think I will make it into a necklace or pin at some point. Just goes to show you that sometimes bakelite can be found in the most unlikely of places. 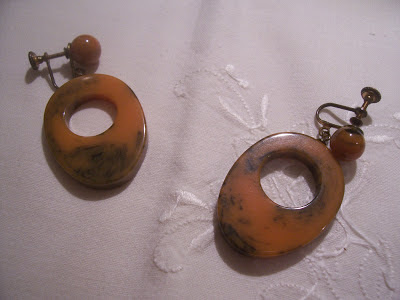 These earrings I found at a thrift store, and they are what is called "end-of-day" Bakelite, meaning that any leftover single colors were mixed together. They are kind of mustard with bluish-green striations (there's your SAT word for today) and are clip-ons. When I went to pay for them, the lady at the counter looked at me and said- "Oh, these are Bakelite, they're probably worth more than the $5 price tag..."

Really? You don't say...I had no idea.... Gee, and here I was just buying them because I needed a pair of mustard-colored earrings! :) 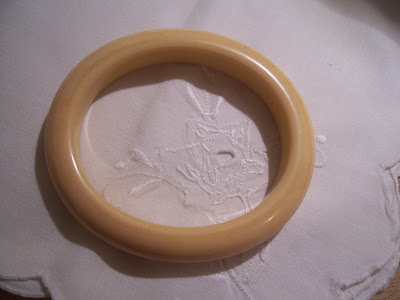 This bangle I just found today- had a few extra minutes and stopped into a thrift store on the way to pick up my daughter from school. It's a really heavy ivory bakelite. Surprisingly, I don't have any bangles this color (lots of red, yellow and orange, though) so I suspect it will get a lot of wear. It's also a bit oval in shape- I have never seen that before- $2.

This last is a single butter knife. I was really fortunate to find this because the thrift store I was shopping in usually prices their Bakelite utensils through the roof. (I guess it's because every time you open MS Living or Country Living in the recipe sections you see photos staged with these old bakelite-handled utensils- ever noticed that?) Anyway, I always buy them if I can get them cheap, and this was- 25 cents. Must have slipped through the cracks! 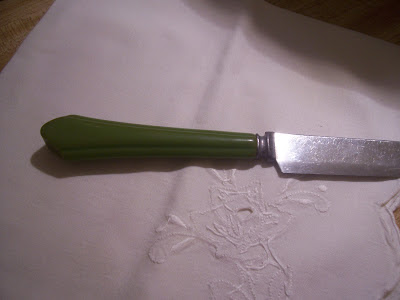 And I don't care if it matches anything else, because this is how I display them: 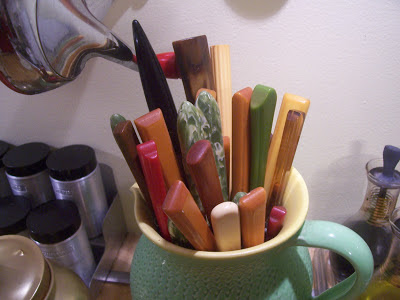 Just fun to look at next to the stove!

Posted by SusieQT at 5:52 PM 8 comments: Links to this post

Hyperventilating in the Thrift Store


Normally I am not the type to get outwardly excited about anything, especially shopping. Calm, cool, and collected, that's me. But today I had one of those experiences in the thrift store that got me all sweaty, weak and shaky.

What could have done that to me? 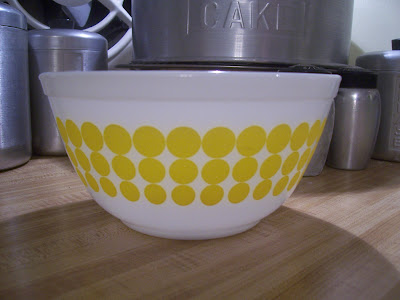 Good thing I was already down on my knees digging through the lowest shelf, because I got so shaky I might have fallen over. It seemed like slow motion as I reached over and grabbed it. And of course from that moment on I never let it go. I think I had a hand cramp from holding on to it.

As I carried it up to the register and I passed a lady carrying the Old Towne butter dish I had debated buying and put down (too expensive at $9.50). I imagined her jealous looks as I paid my $4 for my new prize. (Don't ask me about the crazy thrift store pricing; I'm not arguing one bit!)

So it made it home safe and sound, just needed a little BKF and magic eraser to clean up the scratches. It came out beautifully and now I just have to find a place of honor for it!

Posted by SusieQT at 7:42 PM 4 comments: Links to this post

I've been meaning to write a post for a long time about that "other" 1950s musical idiom, jazz. For me, Rockabilly is OK, and I enjoy it to a point, but my real interest in music is the jazz of the decade. I suppose since we just lost one of the icons of the genre, and a musician I had the utmost respect and admiration for, Mr. Dave Brubeck, yesterday, this is a good time to do it.

I think many of us lose interest in jazz once we get past big band swing. The whole notion of bebop and progressive jazz is kind of stuck in an intellectual fog; most people believe they have to really know something about it to enjoy it. Not so. Jazz is probably America's greatest contribution to world culture; the idea that creative energy can flow unrestricted is the very essence of freedom. Just go into it with an open mind, and I bet you will find something to enjoy. After that, like any other form of music, you go deeper from there.

Bebop jazz in the 1950s was the language of the Beat generation. The Jack Kerouac crowd was drawn to it for its free form and spontaneous emotion, much like the literature they produced. Many of the artists knew each other and fed off one another. Milestone recordings from the era, probably must-haves for any serious music listener would be Charlie Parker with Strings (1950), Miles Davis' Kind of Blue (1959), Clifford Brown's Study in Brown, 1955 (my personal fave), and Chet Baker and Strings (1953). All of these are eminently accessible, many feature recordings of standards which you will probably recognize, and you will enjoy them if you check them out.

Probably one of the most notable recordings of that time, and of any time, is Brubeck's Time Out. Brubeck was such an solid musician; he sought out ways to be different and innovative, beyond just virtuosity on the piano and improvisation. Time Out, recorded in 1959, was devoted to making music in different, and rather unusual (for jazz) time signatures. Tunes in 5/4, 3/4, 9/8 make up the bulk of the album. However, that said, it is simply good music, and the fact that the time signature is a little different has really nothing to do with the accessibility of the music. It was the first jazz album to sell a million copies and is probably still selling in record numbers. Do yourself a favor and buy it- I guarantee you will like it, and probably you have already heard some of the tunes, you just didn't know it.

I was fortunate to be able to see Dave Brubeck and his Quartet live back in 1993, and meet him in person. It was a highlight of my concert-going existence and I treasure that memory.
Posted by SusieQT at 7:48 PM 3 comments: Links to this post