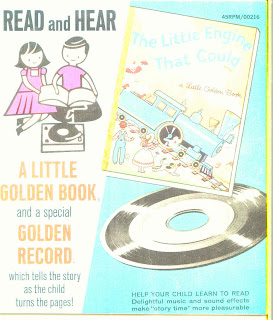 I'm trying to get rid of stuff. My New Year's resolution for the last few years has been to give away or sell things I don't use. So, of course, my mother thinks this would be a good idea for her as well. Guess what happens? I "inherit" a boatload of new stuff.

This is how I got my piano a few years ago. But a piano is not much fun if you don't have any music, right? So my mother is cleaning out her cabinets and I end up with about three large boxes of sheet music and songbooks. I'm not complaining, though- there's loads of good stuff in there. All Tin Pan Alley stuff from the teens and 20s, 1930s movie songs, show tunes, you name it- I probably now have it.

But I had to go through all of it, piece by piece and separate out the good stuff from the things I will never, ever, play. There were some oddball things in there as well, like 45s from when I was a child.

One of them was a Little Golden Book with a read-along record, The Little Engine that Could (c.1956). On the back it says: "Both parents and children alike will take to these ingenious gift sets...Parents will now be able to let the phonograph take over the job of reading 'just one more.'"

Sounds good to me!

And I took it one step farther, even: I loaded the record into the jukebox so I don't have to flip it over. All I have to do is push K5 and K6 and the jukebox reads the story.

Now, if only the jukebox could give them their baths, we'd be in business.
Posted by SusieQT at 12:17 PM 1 comment:

Well, I finally took the plunge. I've been thinking about starting a blog for a couple of years now (has it really been that long???) to keep in touch with old friends and make new ones. It's not that I'm so important or that the world needs to hear my voice, but more that I need a format to share some funny things that happen to me and daily (right...) thoughts and observations. After all, when the majority of my day is spent talking to a pre-schooler and an infant, I could use some adult conversation, even if I'm only talking to myself!

Those of you that know me already will know that I'm nothing if not practical. Perhaps it's my German heritage, or maybe my love of the Depression-era past that convinces me to always use things until they're used up. Anyway, I am still driving the first car I ever owned-my first love, really- a 1997 VW Jetta. I love this car and I really don't want a new one, even if it has 153,000 miles on it and nothing electrical works correctly anymore.

Lately we've been having some trouble with it in damp weather. It starts to miss and lose power when you give it the gas. Not really a good situation, especially when it's raining! Jay (my husband) has been driving it to work lately because it gets much better gas mileage than his truck- a 1990 Chevy with 275,000 miles on it. (Did I mention that we use things until they're used up?) So anyway, yesterday, being quite rainy here in the Northeast, he starts out for work at about 6:15. I get the kids up and get Jayson ready for school. At about 9:30, after dropping him off at Preschool, I'm pulling into the driveway when I get a call from my mother: "I can't find Jay", she says. "Did he call"?

My mother has always been fond of maps, directions and "scenic routes". But she's also a senior citizen and has a way of starting a story from the middle.

"He told me to meet him in the Baptist Church parking lot but I don't see him."

"Mom- stay in your car and wait for me to call his work."

I call his work and talk to his assistant who said that apparently he broke down in the rain, about three hours ago, and three different search parties have not been able to find him.

Not thirty seconds later she calls back with him in the car and I hear Jay in the background saying "I gotta get this car towed."

Ever hear of a "Mass Airflow Sensor"? Didn't think so. Now you know it's a $500 part that has nothing to do with how the car runs, but that it controls emissions. When it malfunctions, the car won't run because the computer tells it not to. Grrrr... It's a simple thing to connect and disconnect, but I guarantee I will be charged for an hour's labor when I see this bill. With the towing we're probably looking at about $700+ which is approaching half of the car's value.

Guess who took my cell phone on the way to work this morning? (He made it in safely today with my new, value-added, extra-special emissions controlled twelve-year-old vehicle.)

I had to stop in at his work this morning anyway to fill out my football pool, so I also got my phone back. But in the car, I'm trying to explain to my three-and-a-half-year old son why we're stopping at Daddy's work. "To pick up my phone and to get my football pool," I said. Because we're betting on Vegas to try to pay for this repair, son.

"Mommy, did you bring your bathing suit? Is Daddy already in the pool?"