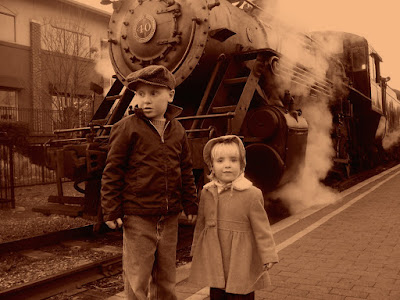 I've been kicking around an idea here for a couple of years, and perhaps by making an official announcement  on this blog I can jump start it. Please join me for the adventure!

I have always been fascinated by the 1930s. Ever since I discovered big band swing in 7th grade I have been enthralled by the Art Deco era. All of it- the history, politics, and economics as well as the lighter side of entertainment, fashion and culture. Seriously studying the 1930s has been my avocation since I was in college. Even as an undergrad music major, I spent far more time with Paul Hindemith and Weimar Germany than I did with many of my friends. As a graduate student, I focused on early 20th Century material culture- the artifacts of technology, transportation and manufacturing from the period. And while I may know a lot of facts, I have always felt that I was missing the experience portion of the equation.

I have always wanted to know what it would have been like to truly live during the 1930s. I would like to do an  experiment in which I put aside most of our modern conveniences and live as a Depression-era housewife. Of course, I do have a family and their needs will have to be accounted for, but I will try to do my best to accomplish all of this in as authentic a way as possible.

Perhaps some of you have had similar thoughts. For some reason I haven't talked about it a whole lot on this blog, partly because most of my readers are into the 1950s. And while I like that time period, I have never really felt the pull to live it like I have with the 1930s-early 40s era. I am also aware that there are other people who do this as a lifestyle (some of whom are my good friends) and have been doing so for years. I admire that and I am by no means considering myself an expert on this- I just want to see if I can do it for myself!

So I am announcing the start of this project in which I live as a 1930s housewife for two weeks in August of 2012. The adventure will start with background posts leading up to it at my other blog: