Today I'm feeling crappy, so no Make-it-from Scratch Monday post, just a random pic of cool stuff at Chez QT. Plus, I'm crazy busy getting ready for my son's birthday party- he turns 6 tomorrow. So you just get to enjoy some eye candy, my 1959 Seeburg jukebox: 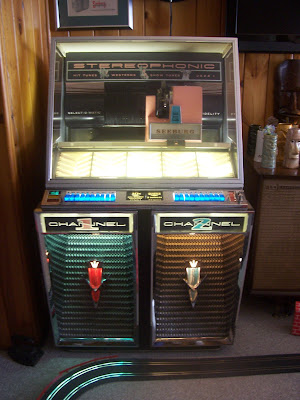 When I was growing up, this used to be in the Rec room of my parents' church. It never worked, and was kind of in disrepair, with the title strips all wonky. But as a small child I used to love just going over to push the buttons, even though nothing ever happened. I used to tell my parents that one day I would own that jukebox. Like all parents, I'm sure they just rolled their eyes and said "whatever"...
But I never forgot, and I even kept a list of all the records I was going to buy to put in it. Once I was old enough to go shopping on my own, I started to buy those 45 rpm records.
Fast forward about 15 years, to when I had my first apartment- my mom told me the church was getting rid of some stuff, and right away I remembered the jukebox. So I called up and offered them $200 for it. I think the church secretary thought I was on something, because she said, "You know it doesn't work, and you'll have to move it!"
No problem! I had my brother go over with his truck the next day and we loaded it up. I paid the church and brought it home.
Once I had it in my apartment, I plugged it in and it lit up. but it did not work. That was OK with me; it was mine, and was the coolest nightlight you ever saw! A few years later, after meeting my husband we got it fixed- apparently years ago some kid had gotten in the back and switched a tube into the wrong spot. The repairman just put it back in the right socket and it played. But not that well- I ended up having to get the amplifier rebuilt. This was not an easy job, and back then the repair was kind of expensive (around $300). But it's worked flawlessly ever since.
We bought a fe accessories to go with it, a tableside wallbox: 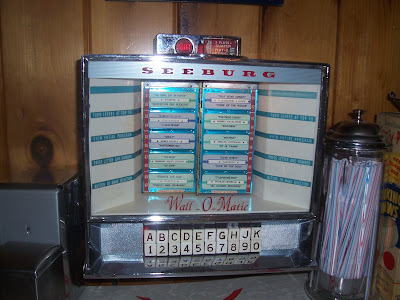 This is not a "mini jukebox" as many people think- there are no records or speaker and it cannot play any music on it's own. It's really called a "remote selector", basically a remote control that lets you make a selection right from your table and then it transmits the selection over to the jukebox via a series of electric pulses over a wire.
A pair of stereo speakers. 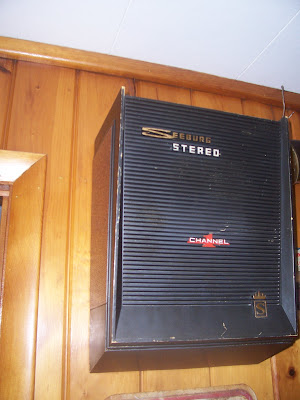 The 1959 Seeburg model 220 (the technical name for my baby) was the first jukebox to offer stereo sound. In order to get the trus stereo effect you had to purchase these additional speakers. Although there are two individual speakers in the front of the cabinet, you don't get the felling of stereo that you get from the speakers in the corner of the room. The promotional literature recommended up to six speakers for a larger room to get the full stereo effect (and to increase sales, because that is what jukeboxes were all about.)
It's interesting to me to note that with digital downloads, people are beginning to go back to a single-driven form of music purchase. Pre-1960s, that was just about all people bought- 45 or 78 rpm singles of their favorite songs. Not until the advent of the 33 LP record in the mid-50s did the idea of an "album" mean anything in terms of sales and artist input.
Now the record industry is all in a dither about "the death of the album", which, if you look at it in historical terms, is not how most people bought music, except for the period from the 1960s-1990s. In fact, a single-driven music industry in the 1950s gave us all those great "one-hit wonder" and regional acts that would never have flourished on a national level. Many of the great 1950s rockabilly and R&B acts were primarily found on jukeboxes, and never got top 40 radio hits. They were strictly niche performers that relied on nickels being put into the coin slots in the areas that they were well-known. It doesn't sadden me at all to think that we might be returning to this type of music market.
So I will leave you with one of those R&B niche acts that hit it big, the Marcels. This is the B side of "Blue Moon", "Goodbye to Love". And it was one of those 45s that I wrote down on my list years ago.
Posted by SusieQT at 3:19 PM